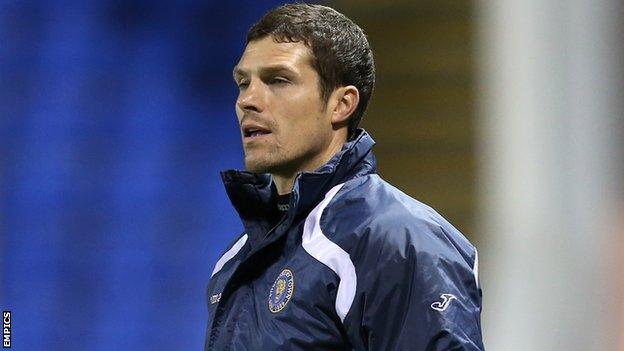 Shrewsbury Town manager Mike Jackson has admitted it is proving hard to plug the gaps in his injury-hit team.

And out-of-favour striker Tom Bradshaw is now out for up to 10 weeks with a potentially season-ending knee injury.

"It's tough trying to get players in, but we're still trying," Jackson told BBC Radio Shropshire.

"It's not easy at this stage of the season to bring in people of the experience and quality we're looking for.

"Teams want to keep hold of players, just in case - and we don't need any more young unproven players.

"The two midfielders aren't going to be available for a while. We're looking at ways to speed it up, but they'll be fit when they're fit. They can get themselves mentally ready, but you can't push players back. They only come back when they're ready.

"We might have to look in those areas. And, striker-wise, we've searched the country. But it's a very thin market we're looking in."

Jackson declined to be drawn on reports suggesting that his former Blackpool team-mate Andy Morrell might join him at the Meadow as assistant manager, following his departure from Wrexham on Monday.

"I know Andy Morrell well. I played with him at Blackpool," said Jackson. "But I don't want to say too much about that, to be honest."

Apart from a trial arrangement with former Walsall manager Chris Hutchings, which did not work out, Jackson has not had a recognised number two since succeeding Graham Turner, initially as caretaker boss, on 22 January.

Jackson, confirmed in the Shrewsbury job last Friday until the end of the season, enjoyed his team's first victory since he took charge when they came from two down to win 3-2 at Notts County on Saturday.

As for Bradshaw, the results of the scan on the knee injury suffered in training last week suggest that the Wales Under-21 international, Town's second top scorer with five goals, is unlikely to play again this season.

"It's going to be eight to ten weeks," added Jackson. "He's going to do well to get back to where we need him to be."

Meanwhile, the Greenhous Meadow has been chosen to stage England Women's World Cup qualifier against Ukraine on 8 May (19:30 BST - to be broadcast live on BBC 2).