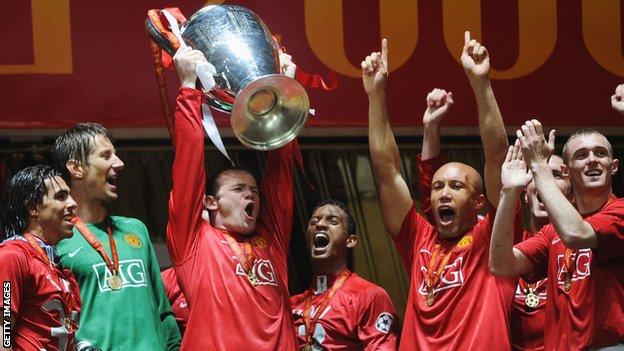 Manchester United striker Wayne Rooney says the one Champions League winners' medal he has is not "enough".

The 28-year-old's sole success in the tournament came with victory against Chelsea in 2008, but he has lost in finals on two other occasions.

United have reached the last 16 this season and face Olympiakos in Greece on Tuesday in the first of two legs.

"One is never enough, especially at this club," said Rooney. "We need to keep trying to get into finals."

United, who were beaten by Barcelona in both the 2009 and 2011 finals, are expected to beat Olympiakos and will hope to make up for a disappointing domestic campaign with their showing in Europe's premier club competition.

They lie sixth in the Premier League table, 15 points adrift of leaders Chelsea and 11 points behind Liverpool, who currently occupy the final qualifying spot for next season's Champions League.

Rooney, who signed a five-and-a-half-year deal with United last week, added: "The feeling you get when you win a trophy is incredible, so you don't want to stop at one.

"If we can go to the final, it'd be great for us. It would be an opportunity to win another trophy, so hopefully we can do that.

"I grew up all my life wanting to win trophies. That's the main aim. That's what you'll be judged on when you finish your career."

Rooney in the Champions League

Wayne Rooney is the all-time leading British scorer in the Champions League with 29 goals.

The England international believes he and his team-mates must take responsibility for the club's league position.

"As a group of players, we have to take responsibility for the league position we are in," he said. "We're better than that. As a team, it hurts when you know you can do better."

"It's important we finish the season strongly and we take momentum into next year but more importantly get into fourth spot and do well in the Champions League."