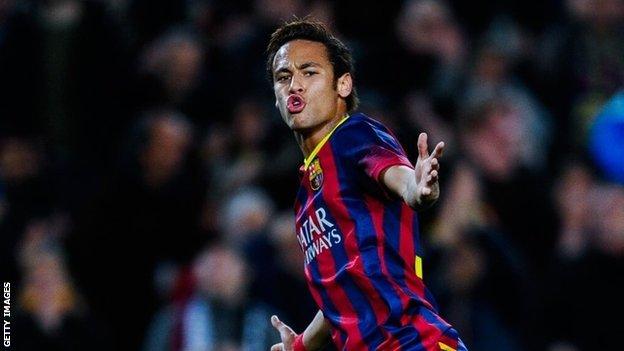 Barcelona have paid £11.2m (13.5m euros) to the Spanish authorities after being charged with tax fraud over the signing of Neymar.

However the Spanish champions insisted they had not committed any offence.

"The aim is to cover eventual interpretations that could be given to the contracts drawn up in the operation to sign Neymar," a club statement read.

Barca paid £48.6m for Santos striker Neymar, 22, in the summer with his parents receiving £34m of the fee.

Between the initial fee paid in the summer, signing-on fee, wages during his five-year deal, agents fees and this latest tax payment, Neymar will have cost the club £106.8m

He is also being investigated but denies any wrongdoing.

At the time of the move, Barcelona said they had paid 57m euros (£48.6m) for Neymar but it has been alleged that, if other contracts are taken into account, the actual cost of the player was far greater.

And last week a judge in Spain ruled there was sufficient evidence against Barcelona to continue investigations into the transfer.

The club added: "The board denies the existence of any tax-related crime in relation to the fiscal obligations arising from the signing of the player.

"Given the existence of a possible divergent interpretation of the exact amount of tax responsibility arising from the signing and to defend the club's reputation and good name, FC Barcelona has this morning made a complimentary tax declaration of a total of 13,550,830.56 euros [...] although we remain convinced that the original tax payment was in line with our fiscal obligations."

There has not yet been any confirmation whether the case will be dropped after Barcelona's payment.

Neymar has scored seven goals in 18 league appearances for Barcelona this season, as well as netting three in seven Champions League matches.