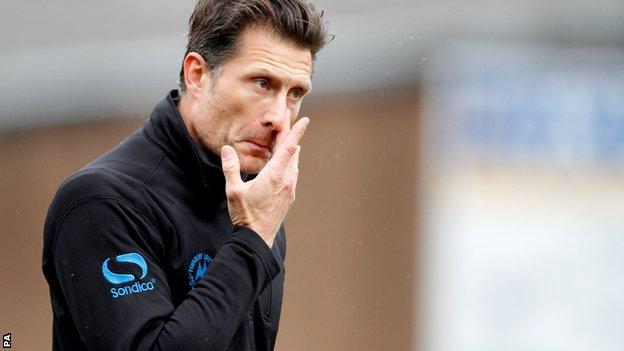 Torquay boss Chris Hargreaves says his side's tough fixture list should be no impediment to getting the wins they need to escape relegation trouble.

Three of the Gulls' next four games are against sides in automatic promotion or play-off places, while Torquay are five points short of safety.

Hargreaves' side lost 1-0 to Accrington Stanley at home on Saturday.

"It's not the Premier League or La Liga - it's a division where anyone can beat anyone," he told BBC Radio Devon.

"The games come round so thick and fast that you can't look back."

"It's a game we should not have lost - it's an ugly 0-0 if anything but we weren't tight enough in one instance in 90 minutes and let someone have too much time on the ball and got punished," added Hargreaves, who is in his first managerial role since replacing Alan Knill at the helm in early January.

"You just have to move on and do what we can do that is going to affect the Burton game.

"I'm expecting a reaction: that's what I was like as a player and I expect them to be the same."

Second-from-bottom Torquay's defeat was all the more damaging with relegation rivals Bristol Rovers, Bury, Wycombe and Northampton joining Accrington in picking up wins at the weekend.

"You can't rely on other teams, you've got to do it yourselves," said Hargreaves.

"I need 11 players to pick themselves and I've said that to the squad. Otherwise you're juggling balls or spinning plates. At the moment it is a case of trying to pick a winning team and it's difficult.

"It's a tough job this, isn't it? But no-one said it was going to be easy - I'm not going to feel sorry for myself as I took the job on knowing how difficult it would be so I can't use that as an excuse.

"But in saying that, lots of other teams also have tight budgets so we're not the only ones."