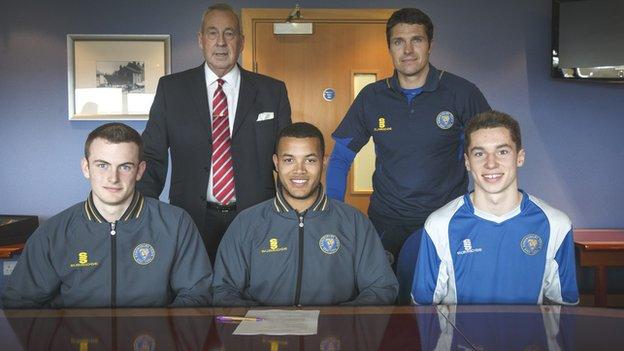 Shrewsbury Town have signed teenagers Dom Smith, Callum Burton and Harry Lewis to their first professional contracts with the club.

Wales Under-19 international centre-half Smith, 18, and goalkeeper Burton, 17, have both agreed two-year deals.

And fellow keeper Lewis, 16, who has already been part of England's youth set up, has signed for three years.

At a time when other clubs at League One level are cutting costs in their youth set-ups, following the introduction of the Elite Player Performance Programme, Shrewsbury are proud of their Level Three academy status.

"This shows that Shrewsbury Town are committed to investing in youth," said Town manager Mike Jackson, whose team responded to his appointment to the end of the season by coming back to win 3-2 at Notts County on Saturday.

"There is nothing better for fans than to see home-grown players out there on the pitch.

"It shows that the board are continuing to progress the club for the long-term.

"With the investment that the club is putting into the academy it is essential that we continue to develop our own players.

"If individually they continue to have the enthusiasm and commitment needed to be a professional footballer then each has a chance to follow the likes of Joe Hart (Man City), Dave Edwards (Wolves) and Mason Springthorpe (Everton).

"There are many examples of young pros getting contracts and thinking they have made it. We, as a coaching staff will not allow this to happen."