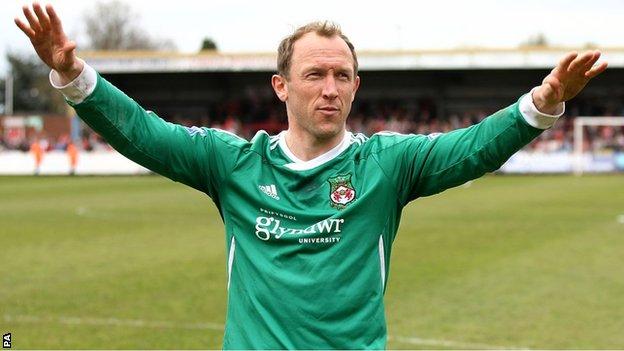 The Conference Premier side have named Morrell's assistant, Billy Barr, as caretaker boss and he will take charge for Tuesday's trip to Luton.

However, Bircham says Barr is also in the frame for the job permanently.

"The next step, Billy takes charge of the club, we advertise the position Tuesday or Wednesday," Bircham said.

"We have a recruitment process in place; I guess it'll take 10 days for applications although I've already had five 'phone calls, believe it or not.

Andy has been a Wrexham hero for a long, long time... it's not a nice time for anybody but he goes

"Billy has intimated that he would be interested in the post, we've invited him to apply along with everybody else and we'll make a decision in due course."

The director of football at Welsh Premier side The New Saints, Craig Harrison, is thought to be one of those linked with the Wrexham job.

However, the former Middlesbrough, Crystal Palace and Preston North End defender says no official approach has been made.

"I've not had any contact," Harrison told BBC Radio Shropshire. "I'm really enjoying my job at TNS, working at a great club with a fantastic set of players.

"Wrexham are a massive club and it's always nice to be linked to a club of their history and tradition. It also means you're doing a good job."

Morrell has not yet confirmed whether he will take some time away from football, although the 39-year-old is likely to be in demand after winning his spurs at Wrexham - taking the Welsh club into the play-offs twice and winning the FA Trophy.

One fit could be at Shrewsbury Town, where newly appointed manager Mike Jackson - a former Morrell team-mate at Blackpool - could be seeking to appoint an assistant.

Wherever Morrell ends up, Barr said that he will be missed at the Racecourse Ground.

"It started on Saturday night, he'd [Morrell] had a chat with Don and then told the staff what his thoughts were," Barr told BBC Wales.

"We told him to sleep on it but when I spoke to him Sunday morning he'd made his mind up that that was time.

"Andy has been a Wrexham hero for a long, long time. We got thrown together when he got his job here and we've bonded really well.

"It's not a nice time for anybody but he goes and he'll be remembered for a long, long time.

"The question was asked then about myself, would I step in and be caretaker manager and I feel that I have to, for a bit of continuity for the players, a familiar face.

"For how long that lasts, I don't know."