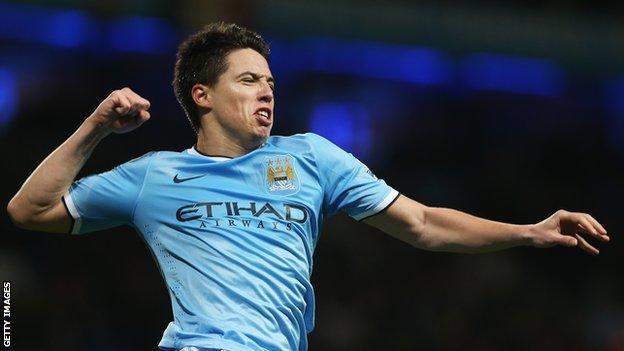 Samir Nasri hopes quadruple-chasing Manchester City do not suffer the same fate as Arsenal when they were in the hunt for four trophies in 2011.

Nasri, whose City side play Sunderland in Sunday's Capital One Cup final, was in the Arsenal team that lost to Birmingham in the 2011 final before ending the season without a trophy.

"I have the experience of losing the Carling Cup with Arsenal," said Nasri.

"After that we won two games in the league, so a win would be important."

Man City's route to the final

Fourth round: Beat Newcastle 2-0 after extra time (away)

Birmingham were relegated from the Premier League in the season they won the League Cup, and City will face a Sunderland side battling against the drop this season in the showpiece match on Sunday.

City are three points behind league leaders Chelsea, with a game in hand, and are still in contention for the FA Cup.

Their prospects in the Champions League are in the balance following a 2-0 home defeat by Barcelona in the first leg of their last-16 tie.

"I don't have good memories (of Wembley) with clubs," added France international Nasri.

"I have lost a final there with Arsenal and with Manchester City, but I won there with the national team against England.