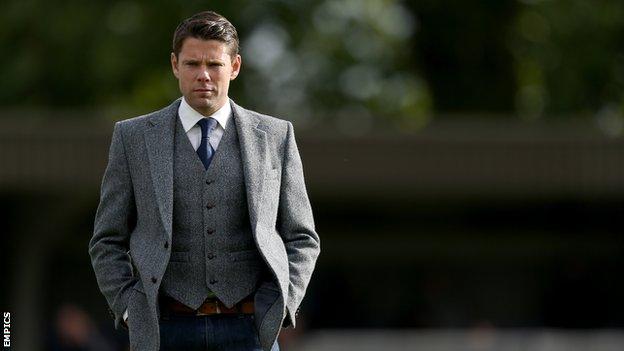 Stanley were bottom with four points from their first 11 matches, but have recovered well to lie 19th, eight points above the relegation zone.

"They just keep proving the doubters wrong, but I've got no doubts about that dressing room," said Beattie, 35, after Saturday's 1-0 win at Torquay.

"If we do the right things at the right times, we're a very good side."

Substitute Kal Naismith scored the only goal at Plainmoor as Accrington stretched the gap between themselves and second-bottom Torquay.

Beattie's side have lost just one of their last seven matches, that defeat coming against promotion chasers Scunthorpe in a game they led 2-0 at half-time.

The former England striker told BBC Radio Lancashire: "The position we find ourselves in, after having no wins in the first 11 games, is tremendous.

"The lads deserve huge credit and they don't get it, but I keep telling them that the position they're in now is remarkable.

"It's their effort and hard work that's done it and it's them believing in what I'm telling them."

Accrington are next in action when they travel to Portsmouth on Tuesday, and they have been boosted by the news that winger Lee Molyneux has extended his loan spell from Crewe.