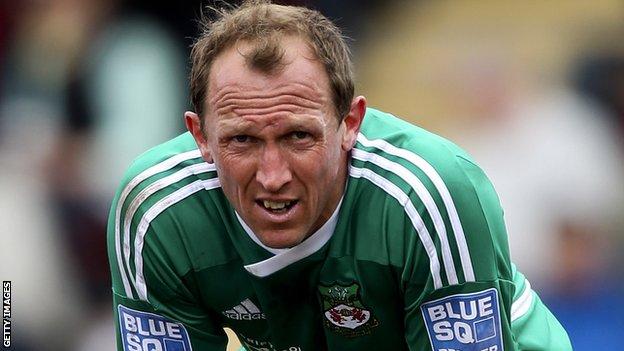 Andy Morrell has stepped down as Wrexham manager, with his assistant Billy Barr taking temporary charge.

The 39-year-old took over as player-manager in September 2011 after Dean Saunders left to manage Doncaster.

"I feel it is in the best interests of both Wrexham FC and me to make a change now," Morrell said in a statement.

"I'm disappointed with how this season has gone, as I desperately wanted to lead the club I love back to the Football League where... it belongs."

Wrexham reached the Conference Premier play-offs twice under Morrell, losing to Luton in the 2011-12 semi-finals and then suffering play-off final defeat by Newport County at Wembley in 2012-13.

While promotion eluded the Dragons under Morrell, he did lead them to FA Trophy glory as they beat Grimsby Town on penalties in the 2013 final.

But the side has struggled this season and Saturday's left Wrexham in 13th place, 10 points off the play-offs.

"I'm really proud of my achievements over the last two years and to see 20,000 Wrexham fans celebrating with me holding the FA Trophy will live long in my memory," Morrell added.

"During my time here I've been treated with the utmost respect by the board and I'd like to thank them and the fans for their support, as both a player and manager.

"I'd also like to thank the players and backroom staff for all their hard work and support throughout my tenure and wish them every success for the future."

Morrell served Wrexham as a player in two spells, first between 1998-2003 and then returning to the Racecourse in 2010.

The striker was part of Denis Smith's promotion-winning side in 2002-03, forming one of the best strike partnerships seen at the Racecourse alongside Lee Trundle and ending that season as the top scorer in all four divisions with 34 league goals.

Morrell stepped in as boss on a temporary basis following Saunders' departure in September 2011, but was confirmed as permanent boss the following month after a string of impressive results.

The good form on the pitch was achieved despite financial turmoil off it, with the Supporters' Trust stepping in to take over the troubled club in December 2011 and then having to raise £100,000 in August 2012 to allow Wrexham just to pay the players wages and kick off the season.

A statement issued by Wrexham read: "Following discussions between the board and Andy it was mutually agreed to allow him to leave to pursue other opportunities, leaving Wrexham FC to plan for the future."