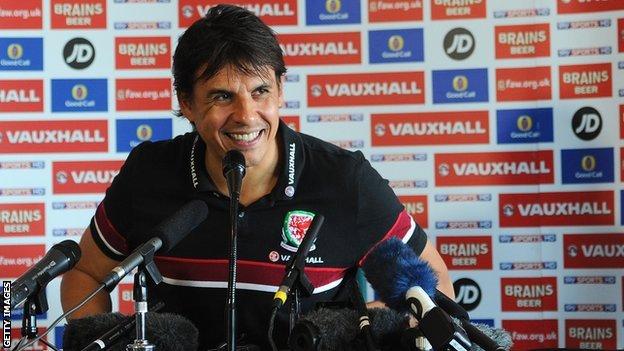 Wales manager Chris Coleman believes qualification for the 2016 European Championship finals is "up for grabs".

Wales have been drawn with Bosnia-Hercegovina, Belgium, Israel, Cyprus and Andorra in Group B.

With eight more finals places available than before, Coleman is "happy" with the draw and hopeful Wales can qualify for a major tournament for the first time since the 1958 World Cup.

"With the extra teams, who knows? It's all up for grabs," said Coleman.

Wales will begin their campaign away to Andorra on Tuesday, 9 September, then face top seeds Bosnia-Hercegovina at home on Friday, 10 October before welcoming Cyprus on the following Monday.

Coleman's men face the other group favourites Belgium away on 16 November, with the return fixture on 12 June, 2015.

Coleman added: "There's a bit of excitement in there, anticipation. Everybody's wondering what's going to happen.

"Teams like ourselves - Wales, Scotland, the Republic of Ireland and Northern Ireland - it gives us a little more chance of maybe qualifying and reaching a major tournament.

"The format that's been before is very difficult for us."

After succeeding the late Gary Speed in January 2012, Coleman saw their challenge for a place at the 2014 World Cup in Brazil end in a 1-1 draw with Belgium.

Wales finished fifth in that qualifying group, leaving Coleman frustrated at rarely having all his best players available.

He says having the likes of stars Gareth Bale, Aaron Ramsey, Joe Allen and Ashley Williams all on the pitch at the same time will be crucial in the Euro 2016 qualifiers.

"This won't be an easy group, of course, but you look at the games and I said this in an interview yesterday, it will be about us, ultimately - how many times we can field our strongest team.

"It doesn't matter who we play against then, I fancy us to beat anybody at our best with our strongest team.

"But looking at the group it's a positive group.

"We need to start well and build up the momentum because from the start of the last campaign, from the very first game we had a man sent off after 20 minutes and we were always up against it.

"Let's get it right. Let's get into this first game whether it's home or away and let's get a positive result and that's what's going to set the ball rolling.

"Bosnia and Belgium are two strong teams, there are no mugs in the group and there will be no easy games.

"We are not going into it targeting third, we have to win as many games as we can."