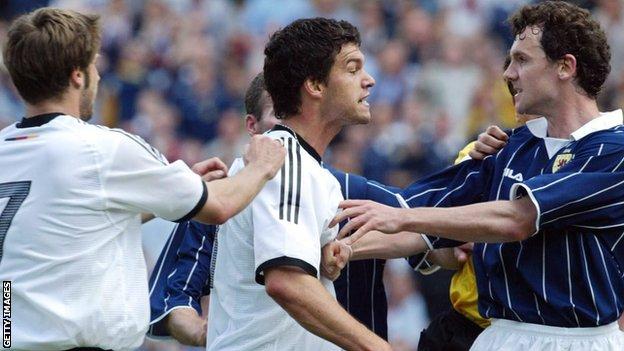 Poland and Georgia are the other opponents in Group D ahead of the finals in France.

Strachan described himself as "excited" by the draw in Nice.

"Other groups might be a bit mundane, but this one has one of the best teams ever - the German side - and a new nation in the tournament in Gibraltar."

It will be really tough for everyone in the group

Strachan said that the four other teams would all think they have a chance of earning second place behind top seeds Germany.

"You've also got the Republic and the commercial managers of both will be jumping for joy with that one," he told BBC Scotland.

In those ties, Strachan will face sometime golfing partner Martin O'Neill - the man he succeeded as Celtic manager - and Roy Keane, who he managed at Parkhead.

Asked for his reaction to being drawn against Ireland's management team, the Scotland boss said: "We are not playing each other - the players are.

"The two sets of supporters will turn it into a cup tie."

Strachan pointed out that the draw also adds spice to the already-arranged friendly against the Poles in Warsaw on 5 March.

While the Scotland manager viewed it as a difficult group, his side are actually the second-strongest side according to the world rankings despite being in pot four for the draw.

Germany are ranked second, the Scots are 34th, Ireland 67th, Poland 70th and Georgia 103rd, while Gibraltar have yet to be ranked ahead of playing their first competitive fixture.

"The Germans might make one mistake, possibly two, but I don't think they have failed to qualify for a major tournament, so the rest of us will be looking for second place," said Strachan.

"It will be really tough for everyone in the group."

For Sunday's draw in Nice, 53 competing nations were split into eight groups of six teams, with one group of five.

As fourth seeds, it meant the Scots could not be drawn against 2014 World Cup qualifying opponents Wales, as well as Montenegro, Armenia, Finland, Latvia, Bulgaria, Estonia or Belarus.

Germany were among the top seeds, with the Irish in the second pot, Poland among the third seeds, Georgia in the fifth pot and Gibraltar among the minnows.

Scotland have not qualified for a major finals since the 1998 World Cup, but Euro 2016 will be made up of 24 nations, an increase from 16 previously thanks to a proposal put forward by the Scottish and Irish football associations.

Ireland manager O'Neill thought it was ironic that his side should be drawn against the Scots considering it was their two football associations who first proposed the expansion.

"I think that anybody who looked at the draw would say it's as tough as they come," he said.

"That said, it's still exciting. Even if you stretch down to pot five, where Georgia have come from, they can play a bit themselves.

"Germany being the outstanding side in the group, I still believe that points will be taken off each other, so I imagine it should remain exciting right until the end."

O'Neill was also relishing the match-up with Strachan.

"I'm sure he is looking forward to it," said the Ireland manager. "I'm sure he'll be as excited as I am myself."

Qualifying matches will be spread over six days rather than being played on just Fridays and Tuesdays.

Nations must finish in the top two in their group to qualify, with the best third-placed finisher also going to France automatically before the remaining eight third-placed teams go into the play-offs in November 2015.

The qualification period runs from 7 September 2014 until 13 October 2015, with the play-offs held over two legs in November. The draw for the finals will be on 12 December with the competition starting on 10 June 2016.