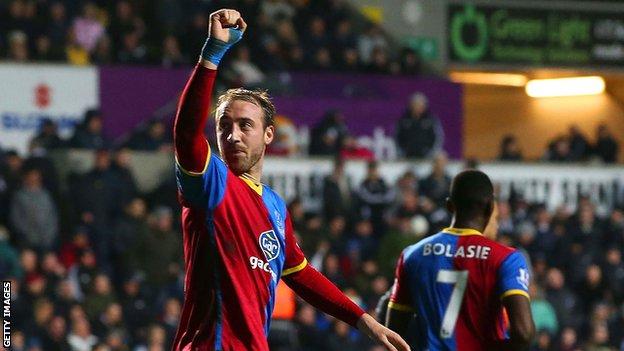 But with eight minutes left, Chico Flores saw red after it was deemed he had fouled Glenn Murray inside the box.

The Eagles looked the happier of the two teams after securing their first away Premier League draw of the season in atrocious conditions at the Liberty Stadium.

The result moved them three points above the relegation zone in 16th, two points behind their 14th-placed opponents.

Swansea started the brighter as Palace sat back and invited pressure from their hosts, who dominated possession and territory early on.

The Eagles looked to utilise the pace of Yannick Bolasie - but he was often left isolated and crowded out by the home defence.

Despite their early dominance, the Swans' first real effort did not come until the 21st minute, when Pablo Hernandez drove a shot wide.

And it took some slick passing and movement to carve out De Guzman's opener.

Ashley Williams's long pass found Bony, who combined with Leon Britton to find the Dutchman, who slotted home from 14 yards out.

Bony seemed certain to double the advantage with a first-time effort from six yards out but Speroni dived to his right to save one-handed.

Palace looked to up the tempo in the second half but Vorm easily gathered a tame, hooked shot from Murray and comfortably saved a Cameron Jerome header.

And Swansea looked to be heading for a comfortable win until the game turned with eight minutes remaining.

Murray latched onto a long ball over the top, toe-poking it past Vorm before being brought down by Flores.

Referee Mike Dean pointed to the spot, though replays suggested initial contact may have taken place just outside the area, before sending off Flores.

Murray converted the penalty high into the right corner, and nearly netted a late winner when his goalbound shot was blocked by Jordi Amat.

There was still time for Palace to have an injury-time appeal for a penalty turned down, with winger Jerome Thomas booked for diving.