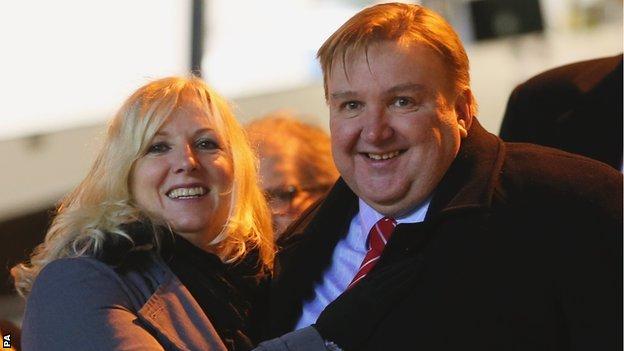 After joining the board in October 2011, the Stourport-based businessman was then made chairman three months later.

In a statement, he said: "I am proud and honoured to have played a part in helping to rebuild Kidderminster Harriers over the past three years.

"But during the past few weeks it has become apparent that supporters have lost faith in my leadership."

The Harriers recovered from a bad start to reach last season's Conference Premier play-offs under manager Steve Burr, only to be beaten by Wrexham in the semi-final.

However, after a run of four defeats in five league games (one of them a club Conference record 6-0 beating at Luton), they parted company with Burr - just three days after the Harriers had held League One side Peterborough United to a goalless draw in the third round of the FA Cup.

It brought an end to a four-year spell in charge for Burr, who is now in charge at Chester, with former Coventry City manager Andy Thorn rapidly named as his replacement.

Under Thorn, the Harriers won their first two matches, including the replay at Peterborough, to set up a lucrative fourth-round trip to Premier League side Sunderland.

But Thorn's men have since picked up just two points out of a possible 15 in the Conference Premier games and now lie 10th in the table, six points adrift of the play-off zone.

Harriers back from the edge

Serrell's statement, released after Saturday's 2-2 home draw with Braintree, added: "I have always respected the fans' view - although a minority have now tainted my opinion because of the personal nature of their vile and abusive attacks on me via social and electronic media. It is now my intention to put my wife, family and business interests before those of Kidderminster Harriers although I still intend to support the club."

Serrell, who owns a plumbing supplies business in Halesowen, also confirmed that his wife, Ruth, would also be relinquishing her role as a director.

Another Harriers board member, former Redditch United chairman Ken Rae, has taken over as chairman, initially until the end of this season.

"As a board we cannot thank Mark and Ruth Serrell enough for what they have done," said Rae.

"But, as they would agree, the most important thing at this moment is that our focus remains on the current playing season.

"We have another huge game on Tuesday evening (at home to Woking) and I'd really like to ask that all supporters please get behind their manager and their players."