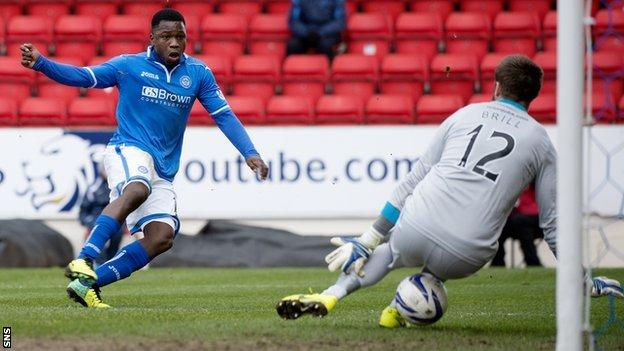 The Saints boss felt that, combined with a glaring missed chance by Nigel Hasselbaink, summed up a bad day for the hosts.

"We should have got something out of the game, particularly in the second half," said Tommy Wright.

"We controlled large parts and we had the best chance of the second half."

Wright was stretchered off in the first half, less than a week after extending his contract with the club.

We didn't win enough tackles in the first half, or second balls.

Saints' Hasselbaink headed a gilt-edged chance off target after David Wotherspoon's shot had been blocked in the second period.

"Nigel's had a good game and he was in the right place," said Wright. "But I think it just came at him a little bit quick and I don't know if he was stretching for it.

"That was the best chance in the game and it summed up our day.

"We didn't start the game well, even from the kick-off, which was a disaster for us, and we didn't win enough tackles in the first half, or second balls.

"A little bit of indiscipline and some crazy decisions at times allowed them a lot of free-kicks and they put us under pressure by putting a lot of balls into the box.

"But we should have got something out of the game because in the second half we were much better than them."