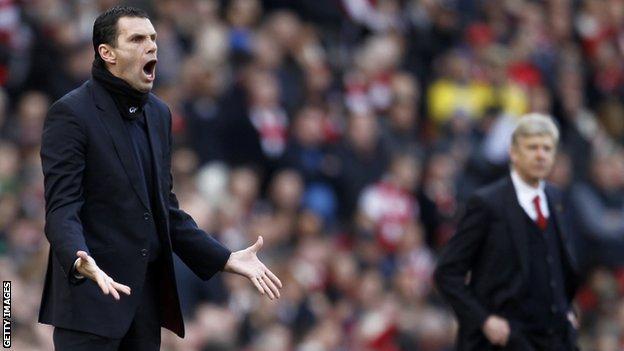 Sunderland boss Gus Poyet has warned his side will be "embarrassed" in the Capital One Cup final if they produce a repeat of the performance that saw them lose 4-1 at Arsenal.

The Black Cats face Manchester City in the final at Wembley on 2 March.

Poyet was left frustrated by his team's inability to cope with a rampant Arsenal at Emirates Stadium.

He said: "If we play like this against Manchester City we could be embarrassed."

Sunderland's route to the final

Sunderland had barely touched the ball when Olivier Giroud scored in the fifth minute, then the Frenchman added a second by latching on to a poor Santiago Vergini back-pass and beating Vito Mannone.

Tomas Rosicky rounded off an excellent team move to score the third, with Laurent Koscielny heading in his side's final goal. Emanuele Giaccherini's superb volley for Sunderland was too late to make any difference.

It was his side's failure to close down Arsenal's players that worried Poyet, and he suggested some of his men may now miss out on a chance to play in the final.

"Now no-one has put themselves on the teamsheet for next week," he warned. "They all had a great chance to show me, but everything I had in mind went in 90 minutes. Now I have to start from zero.

"Arsenal proved again that they can beat anyone, but sometimes players pick the team for you. Now I have a few options for Wembley.

"There are plenty of similarities between the way Arsenal and Manchester City play for me to ponder on."