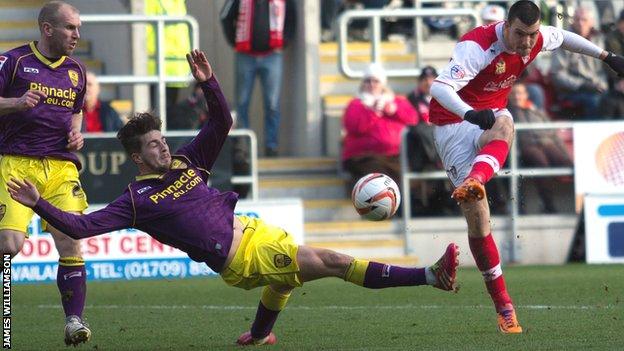 Rotherham recorded their biggest win at the New York Stadium as Notts County slumped to the foot of League One.

The Millers were 4-0 up inside 30 minutes, with James Tavernier curling in a free-kick for the opener.

Vuckic added a second after the restart following a storming run and Tom Hitchcock completed the rout.

The defeat is a sixth in seven games for the Magpies, while Rotherham have now won seven and drawn two of their last nine to raise hopes of an automatic promotion challenge.

"I'm not happy with the first 15 minutes, of course. It seemed we were a bit tired.

"We've got some wonderful, talented players as we've always said and we showed our class.

"It was as good an afternoon as we could have had.

"We showed today that we have a squad of players and not just individuals."