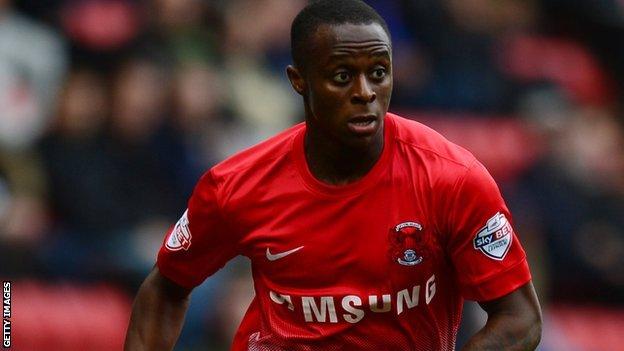 Leyton Orient lost their place at the top of League One despite edging to a narrow win over battling Colchester.

Jabo Ibehre and Freddie Sears went close for the U's before David Mooney fired his 18th goal of the season high into the net from inside the box.

But Moses Odubajo drilled home Shaun Batt's pass to win it on 82 minutes.

It was Orient's third straight victory, but Wolves' 3-0 win over Port Vale lifted them back above the O's on goal difference.

"For the neutral it was a cracking second half and fair play to Colchester. They massively played their part.

"Our keeper had to make some wonderful saves to keep us in the game. But we were a threat on the counter and we scored a wonderful goal to win it.

"We were worth a 1-0 lead at half time and then they put us under pressure for 20 minutes in the second half. Perhaps we needed to show more composure on the turnover of the ball."

"I felt the better team lost. I think we at least deserved a draw. We did all the attacking, I think we've probably out-shot them.

"Overall, I'm very pleased with our performances of late. It's got to turn. We can't keep playing the way we are at the moment, and not pick up points or wins.

"Our league position is false at the moment, but results are not. We have to keep believing in ourselves and believe it will turn because eventually it will."