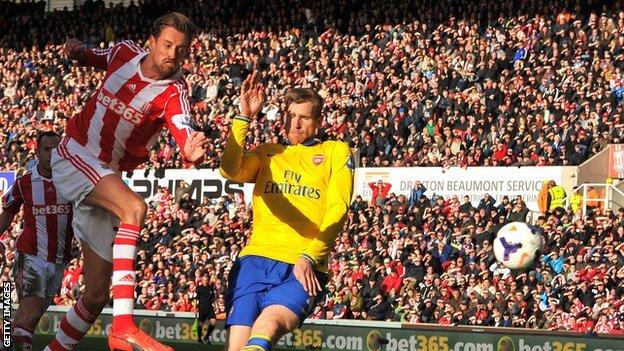 In a robust encounter in which Olivier Giroud was given some particularly stern treatment, with Charlie Adam fortunate to escape punishment for one second-half challenge, the Gunners failed to sparkle.

Chelsea's victory over Fulham allowed the Blues to increase the gap at the top to four points, while Liverpool's win at Southampton saw Brendan Rodgers's side move above the Gunners and into second.

It looked as if the game at the Britannia Stadium would remain goalless after a series of wasted chances, but Walters converted his spot-kick with 14 minutes remaining after Laurent Koscielny had handled.

The goal sparked delight from the home contingent, not least for Walters, who had missed four of his previous six penalties.

This time he kept his nerve to slot the ball to Wojciech Szczesny's left, lifting the Potters six points clear of the relegation zone.

Arsenal midfielder Mesut Ozil came off the bench in the second half and came close to equalising eight minutes from the end, before Yaya Sanogo fired over from eight yards in stoppage time.

But neither player could alter the course of the game as Stoke added victory over Arsene Wenger's side to home wins over Manchester United and Chelsea this season.

Arsenal have now won only one of their past eight games at the Britannia Stadium, and even that victory in 2010 was overshadowed by Aaron Ramsey's horrific leg break.

And their continuing misery at Stoke will hardly lift their spirits ahead of a crucial month in which their title challenge could be decided as they face Tottenham, Chelsea and Manchester City in the space of two weeks.

It might be four years since that Ramsey incident but the animosity between the fans at the start of this encounter underlined how those scars are yet to heal.

Ryan Shawcross, whose challenge led to Ramsey's double fracture, was cheered by home supporters, who began the game by booing every Arsenal touch.

But once that bad feeling had subsided, the hosts showed plenty of endeavour in the first half, though they did not seriously test Szczesny until Glenn Whelan drew a save from the Arsenal goalkeeper just before the break.

Prior to that, the Stoke midfielder was perhaps fortunate not to be punished for a challenge on Giroud, on whom Adam later trod while he was on the ground.

The Arsenal striker, who rode several strong tackles, recovered and, as his side began to retain better possession, set up Santi Cazorla for the visitors' best first-half chance, but the Spaniard fired straight at Asmir Begovic.

Both sides were guilty of being wasteful in front of goal and Stoke continued that theme after the break as Peter Crouch, who has a good goalscoring record against Arsenal, failed to connect properly with two Geoff Cameron crosses and an Adam free-kick.

After the impressive Cameron fired wide, Wenger brought on Ozil for his first appearance since his Champions League penalty miss against Bayern Munich.

Walters showed him how to do it, the Stoke striker having earned the penalty himself as he attempted to lift the ball over Koscielny.

It was no more than Stoke deserved and, although Ozil did make an impression as he fired wide late on, Sanogo's woeful miss in stoppage time summed up a frustrating afternoon for the Gunners.

"That's the first I've heard of it. I didn't recognise that in the game and it would be a shame that people highlight that because, on the day, it was not that type of game.

"I've been made aware that Arsenal felt it was not a just penalty but I'm a bit bemused by that because I thought it was clear cut. I thought we deserved the victory anyway. It was a very satisfying result and performance."