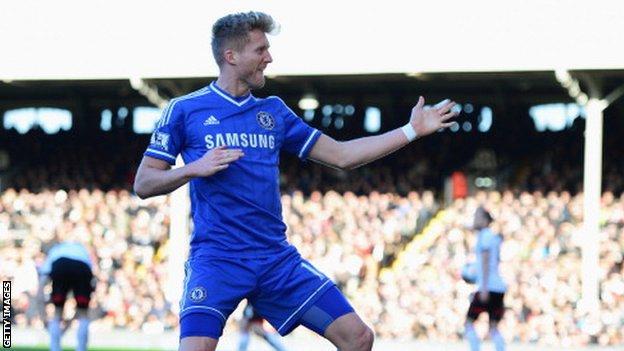 Chelsea pulled four points clear at the top of the Premier League after Andre Schurrle hit a hat-trick against bottom-of-the-table Fulham.

After a goalless first half, it took the German only 16 minutes between his first and third strikes, twice combining with Eden Hazard before being played in by Fernando Torres.

Johnny Heitinga pulled one back after Darren Bent's clip back from a corner.

But Fulham are five points from safety and have not won in eight league games.

They have not won either of new manager Felix Magath's two games in charge, nor taken three points off a team since a 2-1 victory over West Ham on 1 January.

And though they are only four points adrift of 17th-placed West Brom, their goal difference is 26 worse than the Baggies'.

Meanwhile, Chelsea are unbeaten in 12 league matches since their 3-2 defeat by Stoke in December - and moved further clear at the top after rivals Arsenal lost 1-0 at Stoke.

Liverpool are now the Blues' nearest contenders, Brendan Rodgers's side moving above the Gunners with a 3-0 win at Southampton.

Fulham have now gone 17 games without beating Chelsea, since a 1-0 win at Craven Cottage in March 2006

Chelsea manager Jose Mourinho, who was caught on camera appearing to criticise his strikers' lack of goals last week, left Samuel Eto'o out of the squad entirely, starting with Torres up front, but it was Schurrle who did the damage.

After a poor first half, Mourinho and his Chelsea players emerged early for the second period, with Hazard at the centre of everything.

First, his clipped pass over the top played Schurrle in front of Dan Burn, before the German slotted past Maarten Stekelenburg.

The pair combined again when Hazard dinked Schurrle into the penalty area for a simple chance, before Torres repeated the trick, setting up his fellow forward for his sixth goal of the season.

With little else to lose, Fulham pushed on, pulling a goal back after the ball ping-ponged in the penalty area, before Bent managed a sharp pass across goal for defender Heitinga to slide home.

Substitutes Lewis Holtby and Giorgos Karagounis, who replaced Pajtim Kasami and Scott Parker, gave the Cottagers some spark but the damage had already been done.

If the first warning was not enough, Stekelenburg then dithered a second time, with Torres blocking the clearance and having his shot deflected wide.

Fulham captain Brede Hangeland only lasted 16 minutes, replaced by Burn after a nasty clash of heads with team-mate Kieran Richardson.

The first half was largely devoid of quality, Chelsea dominating possession but doing little with it, while Fulham pressed hard, humped long balls upfield and struggled for composure in front of goal.

Fulham have conceded 62 goals in the Premier League this season, the most of any teams, and have let in 31 at home

The Cottagers' best work frequently came down the left, Richardson combining with Kasami, though there was little end product.

Steve Sidwell, Fulham's leading scorer, had a good chance late in the half, but summed up the overall standard of finishing by belting the ball into the crowd.

Moments later, Stekelenburg had to be alert, saving Torres's sharp shot after the Spaniard fired goalwards on the half-turn.

"Chelsea were too good for us. They played very well, wanted to win and were the better team. There were some good situations for us in the first half but we are responsible for not playing so well.

"We will not stay up with this kind of defending and need to learn better. The biggest problem was that our captain [Brede Hangeland] was gone after a few minutes. If he could have played the whole game, we could have had a different result.

"You cannot ask for a win against the Premier League leaders, so the next games are the ones we will be looking to win."