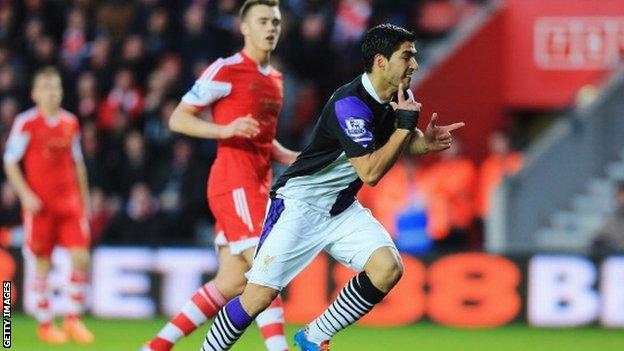 Liverpool strengthened their title challenge as a clinical victory over Southampton lifted them into second in the Premier League table.

Striker Luis Suarez scored his first goal for six games with a low finish from just inside the penalty area.

Southampton's Adam Lallana was denied an equaliser by a post before Reds substitute Raheem Sterling made it 2-0.

Liverpool, as well as Chelsea, remain unbeaten in the Premier League in 2014. Seven of their nine games have ended in victory, with 23 points from a possible 27

The teenager netted with his first touch after Suarez's cross, and Steven Gerrard added the third with a penalty.

The spot-kick was awarded after the tireless Suarez, making his 100th Premier League appearance, was hauled down by Jose Fonte deep in stoppage time.

The Reds head into a two-week break four points behind Jose Mourinho's leaders with 10 games remaining.

But they leapfrog Arsenal because of a superior goal difference and, just as importantly, are nine points clear of fifth-placed Tottenham in the race for Champions League qualification.

Manager Brendan Rodgers will be just as pleased with a clean sheet after his side conceded five goals in their previous two games.

Liverpool remain unbeaten in the top flight in 2014, with seven wins in nine games.

They arrived at St Mary's Stadium having scored in their previous 17 league games, and required just 16 minutes to extend that run to 18.

The goal came after a powerful run by Daniel Sturridge following a Liverpool throw-in, with Fonte diverting the ball into the path of Suarez, who finished clinically.

In a game that featured nine players called up for England duty against Denmark, Southampton spent the remainder of the first half testing the visitors' defence.

Lallana was denied by a post after the Reds had failed to deal with Jay Rodriguez's looping cross, while French midfielder Morgan Schneiderlin fired narrowly over with a shot on the turn.

Rodriguez was then left frustrated by Simon Mignolet's diving save before Sterling put the game beyond the hosts 80 seconds after replacing Philippe Coutinho.

Watched by England boss Roy Hodgson, Sterling kept his composure after Suarez turned provider, beating Dejan Lovren before cutting the ball back into the path of his teenage team-mate.

And Liverpool fans were singing "We're going to win the league" when Gerrard made it 3-0 in stoppage time after Fonte's lunge on Suarez.

"I thought 3-0 wasn't a fair result. Liverpool were a lot more clinical than we were in front of goal.

"But we had some very good chances that wouldn't go in for us.

"When they come back on Thursday and Friday, we'll be more than ready for the next game."