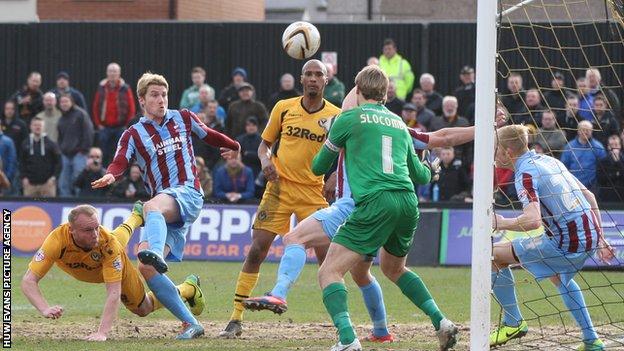 The Iron's hopes of stretching their unbeaten run to 18 matches looked under threat when Lee Minshull's diving header put the Exiles in front.

Paddy Madden turned home a cross from Marcus Williams to equalise and David Syers's low shot seven minutes from time, looked to have won it for United.

But Zebroski fired home an Adam Chapman corner to gain point for County.

"[It was] a thoroughly deserved point [and] a shame we couldn't get all three after our first half performance. We were looking strong.

"We felt we needed that second goal when we were on top and we deserved to be more than one goal up.

"The equaliser gave them a bit of a lift and it derailed us for a little bit but the boys have shown great character to come back and get a deserved equaliser."

"The first half, you have to give credit to Newport. It's effective the way they play, you should never criticise how the opposition are setup because it's 11 versus 11 at the end of the day.

"They're quite direct and we've not quite dealt with that as well as we could have done today.

"The response that I got from the players in the second half tells me everything I need to know about the group and how together they are."