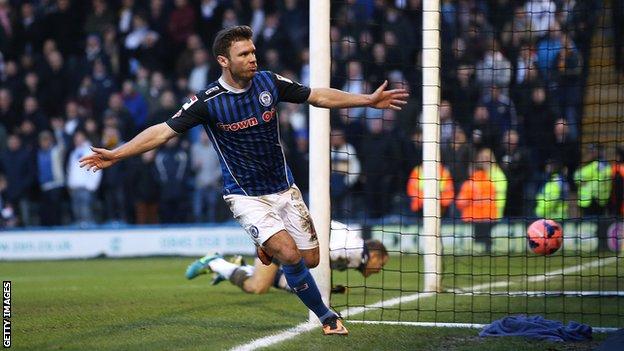 Scott Hogan hit a hat-trick as Rochdale cruised to victory at Spotland against promotion rivals Oxford to move within a point of the top of League Two.

Hogan tapped in Peter Vincenti's header to put Dale ahead right on half-time.

He then beat three men to shoot past keeper Ryan Clarke at the second attempt five minutes after the break.

And an instinctive close-range finish enabled Hogan to complete his treble - for his 19th goal of the season - to wrap up the game on 62 minutes.

Rochdale remain third, but have closed the gap on leaders Chesterfield to one point.

The Spireites do not play until Monday but Dale also moved level on points with second-placed Scunthorpe, who drew 2-2 with Newport County.

Oxford, who are in fifth - five points behind Dale - were furious about striker Hogan's opener.

Up until then, they had matched their hosts, Johnny Mullins and Alfie Potter both wasting good chances.

But, from the moment Hogan netted just before the interval, there never looked to be any threat to Dale extending their unbeaten run to five games.

Hogan showed real quality with his second goal, racing into the area and showing great strength before beating Clarke.

Some questionable defending by Oxford contributed to Hogan's third, but the striker did well to turn and find the net.

Hogan could have added a fourth late on but Clarke saved well.

"It's our favourite scoreline 3-0. We've hit that a lot this season.

"It comes at a testing time for us I suppose with the external people to our football club looking at this game.

"The press were trying to build it up as a win-at-all-costs situation, but it really wasn't.

"It was just three points available. We've got 13 games left and we'll just move on."