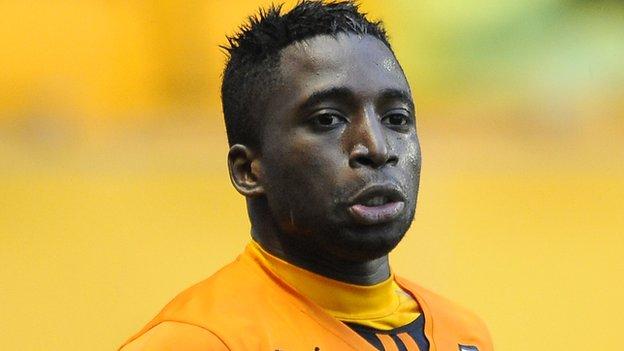 Wolves struck three second-half goals to finally see off Port Vale at Molineux and again move above Leyton Orient at the top of League One.

Bakary Sako broke the deadlock on 52 minutes when his 20-yard right-foot strike deflected into the top corner.

Nouha Dicko then struck twice in two minutes, with a close-range second before finding the bottom corner for his fifth goal in seven games.

But he missed out on a hat-trick when his last-minute penalty was saved.

After Chris Lines fouled James Henry, Vale keeper Chris Neal went full length to his left, to deny the young Frenchman what would have been a first hat-trick in English football.

Wolves top scorer Sako's ninth strike of the season, deflected in off Vale defender Jack Grimmer, was only his second since the turn of the year.

A seventh straight victory for Kenny Jackett's side takes them back top on goal difference, while Vale remain 10th, despite suffering their third defeat in a row.

"Seven games at the top is a terrific achievement by the players and I'm very pleased with them.

"It's a balance between confidence and enjoying yourself but also knowing how hard you've got to work and how important it is to everybody that we're successful.

"We have to make sure before a very big local derby against Walsall that we're right, because after that we have four Tuesday games on the trot.

"The link between the players and the supporters was very good and we're going to need them, because it won't be easy for us, it won't be plain sailing."