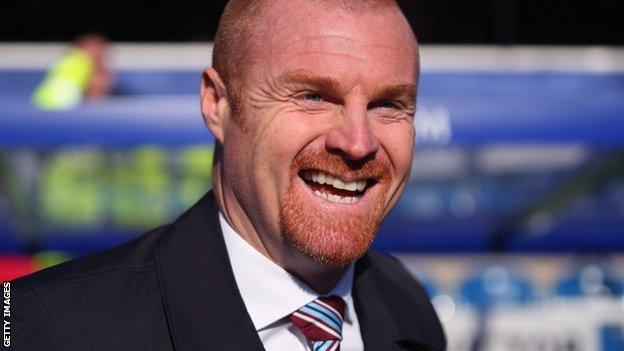 Burnley moved five points clear in second place in the Championship as they beat fellow promotion hopefuls Derby County to extend their unbeaten run in the league to 11 matches.

Derby's Chris Martin was sent off controversially for a second booking after he was adjudged to have dived.

Dean Marney doubled the lead from close range midway through the second half as Derby fell to a first defeat in eight.

Going into the match two points ahead of their third-placed visitors, Burnley knew victory would put them in pole position to finish in the top two and earn automatic promotion to the Premier League.

And, despite being unfancied by many this season, they again showed their steely resilience at the back and flair going forward.

Burnley, unchanged for the sixth straight match, enjoyed much of the early possession but struggled to create many chances of note, until Jones's intervention.

The former Wolves, Wigan and Blackburn midfielder had the ball flicked up to him on the edge of the area by Danny Ings, following Michael Kightly's foray down the left, and his dipping volley looped over goalkeeper Lee Grant and into the net.

Derby went into the match unbeaten in seven games, winning the past three, but were second best for much of the first half as Sean Dyche's Clarets controlled proceedings.

And they were left with an even bigger task just before half-time when striker Martin was adjudged to have dived under Kieran Trippier's challenge and was shown a second yellow card.

Derby were furious at a decision which appeared harsh, especially as Craig Forsyth fired the loose ball into the net after the whistle had blown, but they could have few complaints about trailing at the break.

Burnley are unbeaten in their past 11 games in the Championship, winning five. Their last league defeat was on Boxing Day, 1-0 at Middlesbrough

The Rams, buoyed by what they saw as an injustice, came out a different side after the break and were denied an equaliser as Tom Heaton grabbed Conor Sammon's deflected strike at the second attempt.

Chelsea loanee Patrick Bamford, on as a second-half substitute, then shot over the bar but Marney secured victory for Burnley when he netted from close range after Ings's effort was blocked.

Derby County manager Steve McClaren says Chris Martin should have been awarded a penalty rather than sent off: "I've looked at it over and over and it's a penalty.

"There's slight contact and Chris Martin has slipped because of the contact. His leg has been taken away, it wasn't a dive.

"First thing was he (the referee) hasn't given the penalty which was wrong and then he gave him the yellow card for diving, which is wrong again."

Burnley boss Sean Dyche: "I thought in the first half we were very good again. There was a real quality feel about us as a side. We shifted the ball well and created chances.

"You don't always get what you deserve but I felt we deserved at half-time to be up in the game.

"I think it is fair to say that you'd be (disappointed with the sending off) but the boy Martin has been involved in five or six incidents before then and the ref has had to book him. He could have been booked before that."