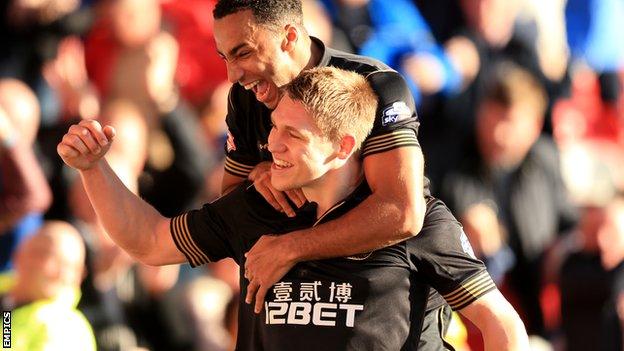 Wigan warmed up for their FA Cup sixth-round clash with Manchester City by thrashing Nottingham Forest.

The win moves Wigan into the play-off places, three points behind Forest.

Billy Davies's team have played a game more than the Latics, who have won five matches in a row.

A tale of two managers

Uwe Rosler has won nine of his 14 games in charge of Wigan. Under Owen Coyle, the Latics won six of 18

Last season's cup-winners play Manchester City next weekend and Uwe Rosler's side will be in good spirits after obliterating Forest's seven-match unbeaten run at the City Ground.

On-loan Leicester man Waghorn put Wigan ahead after Gomez's shot was blocked and Karl Darlow lay prone on the ground.

Forest equalised after the break, as Jamie Mackie's cross found Simon Cox, who laid the ball off for Paterson to drive home.

The scores were not level for long, however, as Boyce nodded Waghorn's volley past Darlow.

Soon after, James McClean's charged down shot dropped to McArthur, who blasted home to make it 3-1.

Forest pushed on, looking to get back into the game, but Gomez sealed the points in the final minute, curling a shot into the corner from 20 yards.

Wigan manager Uwe Rosler: "These teams above us are now in our sights. We should not be happy just to stay in the top six, we want to catch the guys in front of us.

"Automatic (promotion) is a little optimistic, but I am talking about the teams who are third, fourth or fifth.

"I said March and April would be decisive. We knew this would be the time of the year when the prizes were earned."

Nottingham Forest boss Billy Davies: "The fact that we are still in the top six with so many players out tells you how well the team has done so far this season.

"We are now relying on our under-21 coach, Jonathan Greening, to play in midfield, and that tells you exactly what our position is.

"There are 13 games to go and I have said all along there will be twists and turns. Until it is mathematically impossible, then anything is possible. We will continue to be positive."