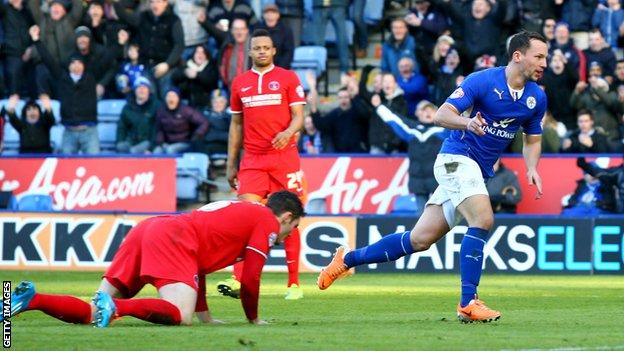 The home side made the perfect start as Jamie Vardy struck from close range before Simon Church had a shot saved as Charlton attempted to respond.

Leicester took control in the second half, Danny Drinkwater's long-range strike making it 2-0 before David Nugent drove in another.

The Foxes remain eight points clear at the top but are now 13 clear of third.

They have not played in the Premier League since 2004 but now look firmly on course to make a return to the top flight this year as they made it 11 wins from their last 14 games in the Championship.

Vardy set the Foxes on their way to victory against Ipswich last time out with an early goal and he again put his side ahead less than 10 minutes into this game as the former FC Halifax striker poked home from Nugent's pass.

The home side wasted no time in pressing for a second as Anthony Knockaert forced a good save out of Charlton goalkeeper Ben Hamer, before Nugent headed over.

Charlton soaked up the pressure and as the half wore on they started to enjoy the majority of the possession.

However, they were struggling to impose themselves in the final third, with their best chance of the first half the result of a defensive mix-up between Leicester defender Wes Morgan and goalkeeper Kasper Schmeichel which presented Church with a sight of goal, but his shot was saved.

Charlton paid the price for failing to turn their possession into decent chances as Leicester scored another goal early in the second half as Nugent's effort was denied by Hamer but Drinkwater was on hand to rifle in the rebound.

Drinkwater forced a good save out of Hamer soon after, before Richard Wood headed over as Charlton attempted to respond.

However, Nugent ensured there was to be no way back for the visitors when he picked up a pass from Vardy, raced towards goal and, with defenders backing off, the striker smashed in a shot off the far post.

Leicester manager Nigel Pearson: "We played very well and showed that, as the side leading the table, we deserve to be there. But we have got 13 more games to go and 39 points to play for.

"We will try to keep that going but we may still get set-backs. But I would rather be in the position we are in than third and trying to ease a way into the top two.

"The big danger is that you get side-tracked into losing focus on what we are able to do ourselves."

Charlton boss Chris Powell: "They are a very good side and we have possibly played against the champions elect if they carry on the way they are playing.

"But I was disappointed about the first goal that was clearly offside and if we could have gone into half-time level that would have helped, but they scored an early goal in the second half and that had their tails up.

"Then really it was a question of making sure we came away from here with not a massive defeat and I suppose I've got to be happy with 3-0."