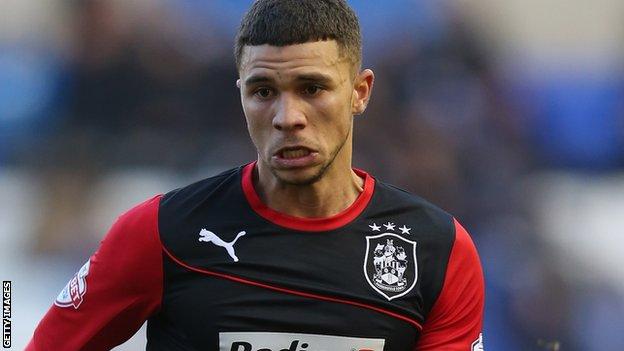 Nahki Wells inspired Huddersfield to a derby win over Barnsley, who dropped to the bottom of the Championship.

The striker provided the assists for four of the home side's five goals, starting with a pass to allow Keith Southern to prod in the opener.

Adam Clayton scored from the spot after Wells had been fouled, before Sean Scannell rifled in a late fifth.

The last meeting between these teams at the John Smith's Stadium - on the final day of last season - was memorable for jubilant scenes from both sets of fans as a 2-2 draw ensured both Yorkshire sides retained their places in the Championship.

The fortunes of the two this time, though, are vastly different. Barnsley started the day second bottom and two points from safety, while Huddersfield are comfortably ensconced in mid-table.

Barnsley passed the ball around confidently in the opening stages as they looked to record their first away win since 3 December.

Away day blues for Barnsley

Barnsley have the worst away record in the Championship. Their only win away from home so far this season was 2-1 at Brighton on 3 December

But the home side had goalkeeper Alex Smithies to thank for keeping the scores level when he superbly denied Nick Proschwitz one-on-one.

It was to prove an important save as Huddersfield took the lead just before the half-hour mark when midfielder Southern poked home from Wells's cross.

Barely three minutes later, Huddersfield doubled their advantage with Wells once again the provider, picking out Ward with a pass and the winger applied the simple finish from close range.

Barnsley were evidently stunned by the double blow and could have been further behind before half time as Wells's lobbed effort landed on the roof of the net.

A third did arrive minutes into the second half when ex-Barnsley man Hammill ran through one-on-one and though keeper Luke Steele managed to get to his shot, the ball dropped over the line.

Wells had once again provided the assist and he won Huddersfield a penalty just before the hour when Steele brought down the former Bradford City striker and Clayton converted the resulting penalty.

Emmanuel Frimpong's speculative effort went wide as Barnsley attempted to muster a response but Huddersfield rounded off an emphatic win with a fifth late on as substitute Scannell smashed an unstoppable drive into the bottom corner.

Huddersfield boss Mark Robins: "Nahki was absolutely phenomenal and I just wish he could have got the goal his workrate deserved.

"He puts himself under pressure because he is a goalscorer and he wants to score, I understand that, but if he keeps working hard the goals will come."

Barnsley manager Danny Wilson: "Football is cruel sometimes. We are going to have bad days and this was a bad day, but we need to knuckle down in training and make sure we don't give easy goals away.

"The goals we gave away were poor and we need to be more resilient."

Wilson expects an angry response after heated exchanges between fans and players, saying: "The fans are passionate and you can't argue with the fans because they follow the club through thick and thin.

"We will get the flak, especially from our fans, but we have to take it on the chin."