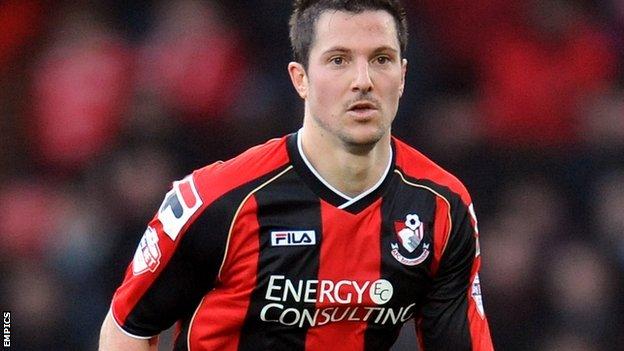 Kermorgant, on his first start for the Cherries, volleyed in Ian Harte's cross and headed another before the break.

Harry Arter made it 3-0 with a shot from the edge of the area before Kermorgant completed his hat-trick with a header from a Simon Francis cross.

Home keeper Lee Camp saved easily from a Theo Robinson volley before Arter completed the rout with a volley.

During their only previous spell in the second tier of English football (1987-90), Bournemouth beat Hull City 6-2 and 5-1 at Dean Court in 1988, but this is their first victory by five goals at this level

They found themselves under early pressure from a Bournemouth side who had failed to win any of their four February games, but Ryan Fraser and Andrew Surman were both denied by visiting keeper Sam Johnstone.

The Manchester United loanee may feel he could have done better when French striker Kermorgant, signed from Charlton for an undisclosed fee in the last day of the January transfer window and restricted to substitute appearances before now, opened the scoring with a low volley that went under the keeper's body.

Fraser was again denied by Johnstone but Kermorgant headed home a Francis cross to make it 2-0 to the Cherries at the break.

Five minutes into the second half it was three, Arter drilling home a powerful finish from the edge of the area.

Kermorgant completed his hat-trick from another Francis cross before home keeper Camp was eventually called into action in the 75th minute from Robinson's tame effort.

Camp kept out a header from Paul Keegan before Arter volleyed home from 18 yards after Johnstone's punched clearance from a Harte corner landed invitingly to him.

"Yann added a different dimension like you hope he would. He's technically very good, we didn't want to bring in a one-dimensional player.

"What we don't want to do is take away from out footballing principles and launch balls up the field to him and play the percentages.

"Although he is a tall lad, he is technically very good and can play with his feet and he is good with his chest and he'll fit our style of play which we felt was very important.

"The really important goals from my perspective are his aerial presence from headers, which is something we've lacked this season, and those were two headed goals of high quality."

"Our performance was unacceptable from start to finish. We have 13 games left and they are massive games.

"I have to apologise to our fans. They've come a long way and we have let them down.

"I am all the more disappointed because I felt we had a chance of getting something out of this match but we had to change our gameplan early in the game and never recovered.

"We were all over the place defensively. Bournemouth's front two caused us all sorts of problems."

Shots on Target
Home10
Away1