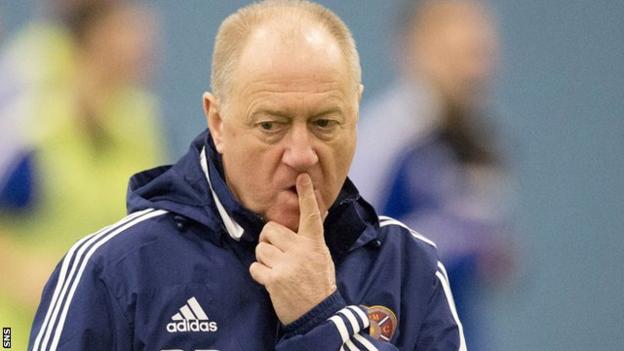 Hearts assistant manager Billy Brown has had his contract extended until March, but there are no guarantees over the coaching team's long-term future.

Brown was originally told his deal at Tynecastle would end mid-January, but it has now been extended twice.

Businesswoman Ann Budge, who is working to take the club out of administration with the Foundation of Hearts, will review coaching staff in due course.

The deal needs to be ratified at a UBIG creditors' meeting, set for March.

Brown has spent time in coaching roles at Hibs, East Fife and Kilmarnock - and was assistant to Jim Jefferies at Hearts when the club won the Scottish Cup in 1998.

Hearts manager Gary Locke has a contract with the cash-stricken club until the end of the season, with reports suggesting Budge could replace him with former Hearts and Scotland boss Craig Levein.

"There will be a full review of everything at the club by BIDCO. All depts will be assessed by BIDCO with their professional advisors in due course. Professional people making professional decisions."

Budge, 66, is the sole director of BIDCO 1874, the company that has struck a £2.5m deal with administrator BDO, which could mean a move out of administration by April.

She was the founder partner of the IT company Newell & Budge, which was sold to the French company Sopra in 2005 for a reported profit of about £40m.

BDO agreed a deal with BIDCO 1874 for the purchase of the shares from the club's majority shareholder UBIG, the bankrupt Lithuanian institution which holds a 78.97% stake.