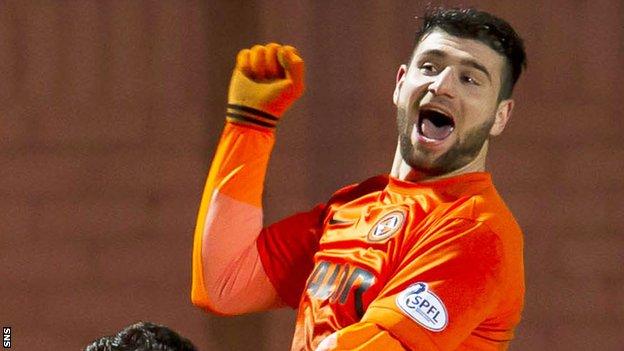 Turkish forward Nadir Ciftci was hailed as a "special talent" by manager Jackie McNamara after he helped mesmerise Motherwell's defence at Tannadice.

Ciftci did not score and conceded a penalty with a hand ball but was instrumental in the 3-1 victory.

"You can see again what a talent he is, his vision and his movement," McNamara told BBC Scotland. "He's just turned 22 and he's a special talent.

"He's here because of the little flaws in his game."

Ryan Dow's done things the right way. He looked a threat, his energy and his vision at times. He's a real good player

With United leading 3-0, Ciftci, who started his senior career with Portsmouth and joined United in the summer from Dutch outfit Breda, needlessly lifted his arm to deflect a James McFadden free-kick and allow John Sutton the chance to bring Well back into the game.

"It's up to me to try to get the flaws out him and concentrating for the full 90 minutes," said McNamara.

United's goals were scored by the two players - Ryan Dow and Gaving Gunning - who had come into the starting line-up to replace the injured Ryan Gauld and John Souttar.

McNamara said that 22-year-old Dow, who opened the scoring, was to be handed a place in the team even before those injuries.

"He started the season for us and he was unfortunate to get injured then the other ones came back in and, with the performances they put in, he found it difficult to get himself back in," said the United manager.

"The last two games, he has come on and done very well and, regardless of Ryan, he would have started tonight possibly in place of someone else.

"He's done things the right way. He looked a threat, his energy and his vision at times. He's a real good player."

Defender Gunning had not yet scored this season before his double against Motherwell.

"I said at half-time it was nice to see him scoring as there's not too many team who haven't this season and fortunately he got another one just after half-time," said McNamara.

The United manager was not so happy with what took place after Gunning's second goal.

"I'm delighted with the result," he said. "I thought the performances in the first half was excellent.

"I thought in the second half, a good start getting the third goal, but I thought it wasn't a very entertaining match after that.

"It was very stop-start, a lot of free-kicks and percentage football at times.

"They got a lift with a needless penalty and it was a bit nervy and scrappy after that, but after the first half I thought we well and truly deserved to win."

United have now won three straight games - all at home.

"It's two wins in the league and Cup game," added McNamara. "It was important especially to keep winning at home - I think that's us equalled the amount of wins we had the whole of last season, so that's progress."