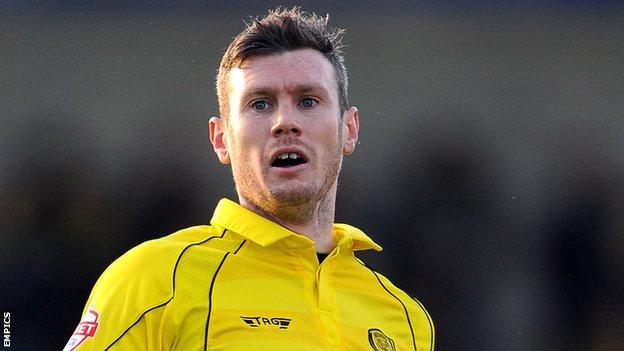 Northampton Town have signed Burton defender Zander Diamond on loan until the end of the season.

The 28-year-old has arrived at Sixfields following the news that Cobblers central defender Lee Collins will miss the rest of the campaign.

Diamond has played 13 times for the Brewers this term.

"He wants to come here and I'm sure he'll be a really good player for this situation," Northampton boss Chris Wilder told BBC Radio Northampton.

"By all reports he was superb last year and sometimes you get out the side, the team does well and you can't get yourself back in."

Former Scotland Under-21 international Diamond started his career at Aberdeen, before moving to Oldham and then joining Burton in 2012.

"Zander is an experienced player, played a lot of games in Scotland, he's out of the team and he wants to play football," said Wilder.

Burton boss Gary Rowett added: "It's important to stress he hasn't done anything wrong, he's been a brilliant pro and has never complained once about not playing.

"He also never tried to instigate a move away. Players want to play football and we want to keep them all here, but every now and then you've got to let people go out and do what they want to do."