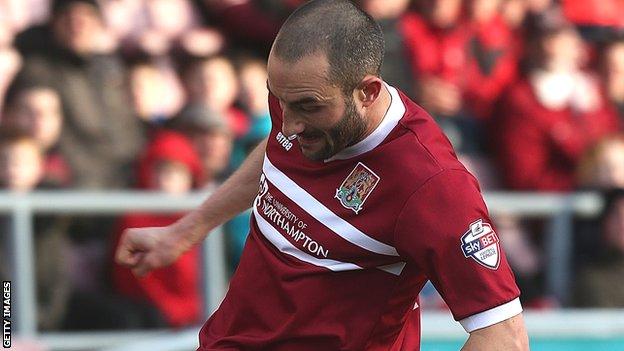 Northampton Town moved off the bottom of League Two for the first time this year with victory over play-off hopefuls Southend United.

Mathias Kouo-Doumbe headed in Chris Hackett's corner to put the hosts ahead, before Michael Timlin latched on to Marc Laird's throughball to level.

But Hackett slotted in Emile Sinclair's cutback to secure the hosts' victory.

Hackett thought he had scored a second but saw his back-post header ruled out for offside, although it barely mattered as the Shrimpers failed to mount significant late pressure.

Phil Brown's side are in the midst of a worrying slide, having not recorded a victory in seven league games, but remain in the final play-off spot.

Meanwhile, Cobblers boss Chris Wilder has got the Sixfields contingent believing that survival may be possible with three wins from their last four, but they have to make up a five-point gap if they are to climb to safety.

"It was another great effort by the players. I wanted us to play a little bit more first half - they didn't allow us to get our heads up, but we did in the second half.

"When the final whistle went, people weren't talking about our league position.

"It's a valuable three points and if we play with the same commitment and drive that we have tonight, then we'll continue to be a difficult side to play against.

"I don't think anybody will fancy playing us at the minute."

"Quite simply, we didn't match them in the battle in the second half and that was the difference between the two teams.

"Northampton fully deserved to win the game. They looked like they were fighting for their lives and we have to have that kind of mentality from now until the end of the season.

"One or two harsh words have been said to one or two individuals. I want them to take responsibility for their performances.

"Tonight, I don't think one or two did, and consequently we were picked off and we lost the game."