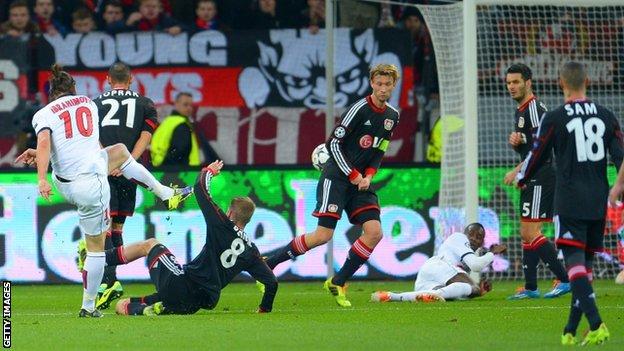 Blaise Matuidi slid the ball under goalkeeper Bernd Leno to give the visitors a third-minute lead.

Ibrahimovic then scored a penalty and fired into the top corner from 20 yards within three first-half minutes.

Before Tuesday, the Sweden striker had appeared in 30 matches in the Champions League knockout stages but only scored five goals, and he has yet to win the competition despite spells with Barcelona, Juventus, AC Milan, Inter Milan and Ajax.

Here he was a crucial presence, however, and even without their injured £55m striker Edinson Cavani, PSG sent out a warning to the rest of Europe's big teams with a masterful away performance. They go into the return leg at Parc des Princes on 12 March knowing no side has ever overturned a 4-0 deficit in the competition.

Laurent Blanc's side have lost just once in the French league all season, in contrast to their hosts who, though still second in the Bundesliga, have lost five of their last seven league matches - and whose last foray into the Champions League knockout rounds was two years ago when they were beaten 10-2 on aggregate by Barcelona.

The visitors made a quick start in Germany as France midfielder Matuidi won the ball back inside Leverkusen's half, before running on to Marco Verratti's through-ball and firing home.

After missing from close range, Ibrahimovic then doubled the lead from the penalty spot. Spahic needlessly pulled Ezequiel Lavezzi back off the ball and the Swede calmly converted from 12 yards.

And just before half-time, he scored his second. The striker, who has scored 19 goals in Ligue 1 this season, received the ball from Matuidi just outside the penalty area before brilliantly firing left-footed into the top corner.

Leverkusen's frustrations only grew after the break when Lucas's theatrical fall saw them reduced to 10 men as Spahic received his second yellow card of the evening for an innocuous push.

The visitors thought they had made it 4-0 when Matuidi's shot was deflected into the net by Leverkusen defender Philipp Wollscheid only for the goal to be ruled out because Lavezzi was offside.

But the visitors got their fourth when substitute Cabaye converted from 18 yards for his first goal since signing from Newcastle.