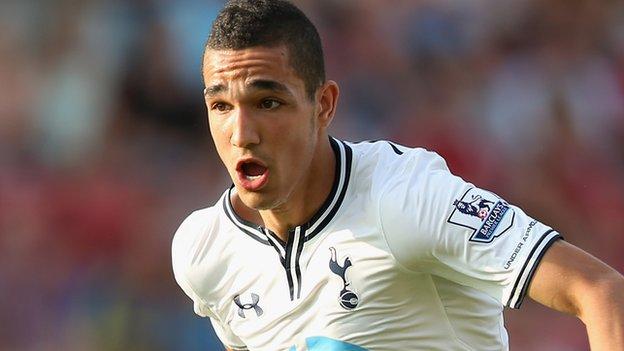 Algeria's World Cup hopes have been boosted after Tottenham Hotspur's Nabil Bentaleb pledged his international future to the North Africans.

The midfielder, 19, had played for France at junior level but can switch allegiances under Fifa rules.

Algeria have named him in their squad for the March friendly with Slovenia.

"Football Federation (FAF) president Mohamed Raouraoua met with (Bentaleb), who agreed to play for the country of his parents," read a FAF statement.

"Bentaleb will be called up for the next phase of the national team's preparations on 1 March, ahead of the match against Slovenia on 5 March in Blida."

Bentaleb was little-known to most Premier League followers until Tim Sherwood replaced Andre Villas-Boas as Tottenham manager in the run-up to Christmas.

He made his Premier League debut as a substitute in Sherwood's first game in charge, a 3-2 victory at Southampton.

After two more substitute appearances in the league, Bentaleb's full debut came in the FA Cup loss at Arsenal and the central midfielder has played every minute of every Spurs match since.

Algeria will contest Group H at this year's World Cup where they will face Belgium, South Korea and Russia.

The Desert Foxes competed at the 2010 finals in South Africa, drawing 0-0 with England and losing their other two group games 1-0 to Slovenia and the United States.