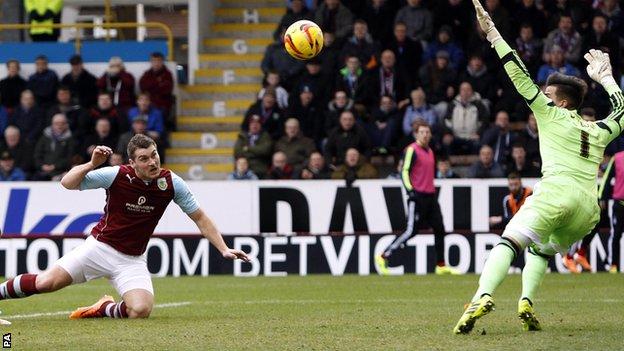 Scott Arfield fired the hosts into the lead from the edge of the box before Vokes headed in at the far post.

Vokes hit a second before the break, his shot deflecting past Karl Darlow, to take his tally to 18 for the season.

Sam Vokes scored 14 league goals between leaving Bournemouth in May 2008 and the start of this season.

He now has 17 this season already, plus one in the FA Cup.

Djamel Abdoun scored a penalty for Forest at the second attempt but they lost for the first time since November.

The Clarets remain unbeaten at home this season and stay eight points behind leaders Leicester, who also won.

Forest - who last lost in the league at home to Reading three months ago - are now eight points further back in fifth place and look set for another play-off campaign at best.

Arfield had already had a shot cleared off the line by Jamaal Lascelles when he nutmegged Danny Fox on the edge of the box and lashed past Darlow to open the scoring.

Sean Dyche's side doubled their lead when Kieran Trippier's cross was thumped home by Wales international Vokes, who then made it three in fortuitous circumstances when his shot looped into the net off a Forest defender.

Billy Davies's visitors were much improved after the break and struck the crossbar from a header by Lascelles, who also had an effort cleared off the line.

Substitute Simon Cox was then brought down for a penalty and while Clarets keeper Tom Heaton did superbly to keep out Abdoun's spot-kick, the Algerian buried the loose ball for a consolation.

"I don't think a game is over at half-time, but I think the performance warranted it to be. I thought that was top class, I thought we were absolutely first class.

"There is massive expectation at Forest and you can understand why. They have a manager who understands the level. Whatever team they put out you know you are in for a game. I thought we dealt with that very well today.

"It (the promotion talk) is only outside noise, we focus on what we are doing. The mantra has been clear since pre-season, one game at a time. Never gone beyond that, they are hungry every time the whistle blows."

"They got us at the best time possible. We are missing so many players. We lost Andy Reid yesterday with a calf problem.

"That is not taking any credit away from them because in the first 45 minutes their team competed, worked and battled much better than we did.

"We had a certain game plan before the game. To come to Burnley you have to play a certain way. You have to prepare to face a certain type of game and unfortunately for the first 45 minutes they didn't listen.

"They played a very direct game that puts you under pressure and quite simply we never handled it. We didn't do what is necessary against this type of team. We had better success second half because we changed our game. We were more aggressive, we were more energetic. But it was too little, too late."