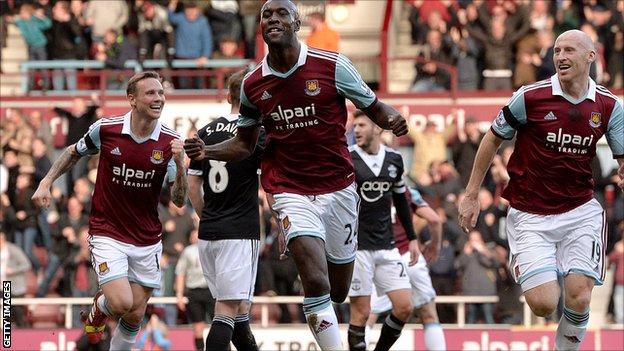 In-form West Ham earned their fourth consecutive league victory after coming from behind to defeat Southampton.

Three minutes later, Carlton Cole made it 2-1 for West Ham before Rickie Lambert hit a post for Saints.

"Southampton had so much of the ball but Adrian had so little to do with Saints putting so many of their opportunities off target. They had more than enough chances to score but the problem is they didn't take any of them."

Kevin Nolan made the game safe with a volley from close range and Mohamed Diame also hit the bar late on.

The result continued West Ham's renaissance and moved them further away from the relegation places, with Sam Allardyce's side now sitting comfortably in 10th position on 31 points.

It was Southampton's first league defeat in seven games, having won three of their last six, with any faint hope of qualifying for Europe now surely over.

The result was harsh on the visitors, who carved out 25 opportunities but only managed to get five on target against a West Ham side who clinically punished such wastefulness.

It also meant consecutive defeats for Southampton after they lost in the FA Cup last weekend at Sunderland.

Manager Mauricio Pochettino was heavily criticised for fielding a much-changed team in that game and spoke during the week at being hurt by that criticism.

Perhaps with that in mind, his side started as if they had a point to prove. The unmarked Yoshida took advantage of poor defending to head home Davis's free kick from close range and record his first Premier League goal.

West Ham responded well to the setback and Jarvis benefited from a tight offside call to break clear and level with a neat finish past the onrushing Boruc after a fine Nolan pass from deep.

Buoyed by that, West Ham then went ahead three minutes later. Cole smashed in from six yards after his initial header from Stewart Downing's corner cannoned back off an upright and Yoshida failed to clear.

Lambert headed against a post for Southampton before the end of an entertaining first half at Upton Park and Saints felt they should have had a penalty in the early stages of the second period following a handball by James Collins.

However, referee Mark Clattenburg waved away their appeals in the first Southampton match he had taken charge of since the club made an official complaint accusing him of insulting captain Adam Lallana in December.

West Ham goalkeeper Adrian was then equal to Luke Shaw's low shot from 25 yards, and the defender continued to threaten by outpacing Collins and almost finding Lallana with a cross.

At the other end, Collins headed a Downing corner over the bar.

Pochettino turned to his bench in an attempt to get his side back in the game and it almost paid off immediately.

Gaston Ramirez replaced Jack Cork and within minutes the Uruguayan produced a wonderful piece of skill on the edge of the area to nutmeg Collins before blazing over from 12 yards.

Lallana then dragged a shot wide and, within minutes, it was 3-1 to West Ham.

Another Downing cross caused mayhem in the Southampton box before Cole's header found Nolan in the six-yard box. He volleyed home on the stretch for his fifth goal of the month.

Diame then hit the bar with a fierce dipping strike but the visitors refused to give up. Lallana forced a fine low save from Adrian at his near post and Jay Rodriguez sent a half volley just wide but the Hammers held on.

"It has been a fantastic run for us.

"The four wins on the trot from where we were is an outstanding performance by the players.

"I thank them for their efforts and the quality they are showing at the moment.

"In the Premier League it is all about the resilient qualities in defence and you have to score a goal, which today contributed massively in us winning this game.

"The three goals we scored were excellent and that got us back after going 1-0 down so early on. Credit to all the players."

"I am very disappointed with the defeat today. I thought we fully deserved to get something more from that game.

"We had full control in the game and that even led us to go 1-0 up. It is clear that the 1-1 goal came from an offside position and that was unlucky for us.

"Then the team struggled to recover from going 2-1 down and that made everything quite difficult for us as well.

"In the second half we created many good chances and were unlucky not to get the 2-2, which actually changed the game.

"Overall today, I thought we were quite unlucky with the refereeing decisions and to have not scored more goals."

For a selection of images from today's matches go to the BBC Sport Facebook page.