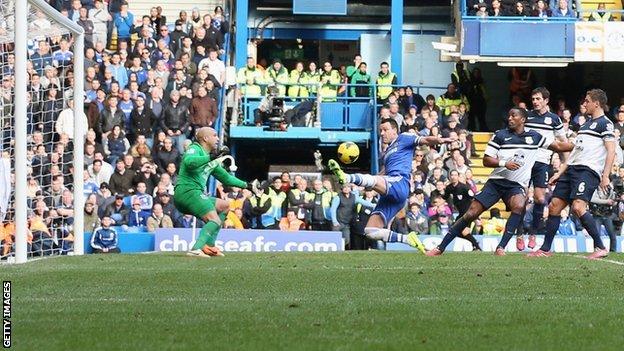 John Terry grabbed a stoppage-time winner as Chelsea beat Everton to retain their advantage at the top of the Premier League.

Neither side created many clear chances but the Toffees looked sharper for much of the game, only to lose out in agonising fashion.

The league leaders lacked cohesion, despite a promising opening and a marked improvement in the final stages.

But the victory, their 12th in 14 home league games this season, means they are one point clear of Arsenal and three points ahead of Manchester City, though the latter have one game in hand.

Everton's hopes of ending Jose Mourinho's remarkable home league record, which now stands at 74 games unbeaten as Blues manager, were dealt a blow in the warm-up.

Lacina Traore had to be replaced in the starting line-up because of a hamstring injury, but the change seemed to unnerve the hosts more.

The fit-again Terry, Gary Cahill and their defensive colleagues struggled to deal with Everton's movement and lack of an out-and-out striker.

"Chelsea left it late but got there in the end to leave Everton frustrated after a good performance which deserved better. Another three points for Chelsea but this was a less than dominant display."

Traore's stand-in Steven Naismith, a scorer in both his past two games against the Blues - including the winner at Goodison Park in September, impressed while Leon Osman and Kevin Mirallas also caught the eye.

But for all their fine build-up play, they did not regularly test goalkeeper Petr Cech.

Mirallas mis-kicked a great chance and also had a deflected effort go wide, while Phil Jagielka glanced a header off target.

The closest they came before the break was when Osman forced a stunning tip-over from Cech with a fierce 20-yard strike.

Chelsea, with Eden Hazard again their main threat, were disjointed and sloppy in possession for the majority of the first period, though Samuel Eto'o threatened on several occasions and Willian had a couple of tame shots easily dealt with.

But the hosts lacked conviction and it was no surprise when a frustrated Mourinho changed things at the break.

Ramires replaced the ineffective and injured Oscar, and his introduction led to a slight improvement, but still little in the way of goal threat.

Branislav Ivanovic had a powerful close-range half-volley beaten away, and Hazard and Willian had attempts at goal.

At the other end Cech had to make a brilliant diving reaction save to keep out an Osman shot that took a nick off Mirallas.

But just as Everton, who have not won at Stamford Bridge since 1994, seemed to have withstood a period of late pressure, Lampard's beautifully struck set-piece allowed Terry to earn his side victory.