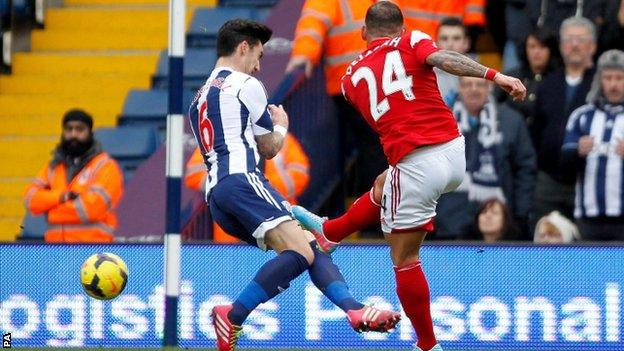 Ashkan Dejagah's first-half goal had looked set to lift the Cottagers off the bottom of the Premier League table with victory in a game Magath had described as "the most important in the club's history".

But instead the Baggies rescued a draw when Maarten Stekelenburg let Vydra's shot slip through his grasp, goal-line technology confirming that the ball had crossed the line before the Fulham goalkeeper could retrieve it.

It was the fourth consecutive home league game that West Brom have salvaged a point after being behind at the break, and they almost went on to claim victory.

It took a fine save from Stekelenburg to deny Chris Brunt in the dying seconds, meaning Baggies boss Pepe Mel is still waiting for his first win after six games in charge.

While Mel needs his side to make a better start to matches, Magath appeared to have quickly got his message over to his players since his Valentine's Day appointment.

The German, well-known for his love of discipline and his work ethic, watched his new side play with more and more belief than their hosts early on, and it was the Cottagers who were creating the chances too.

With Lewis Holtby and Dejagah providing a regular supply of crosses, the Baggies were relieved to see Johnny Heitinga head over and Steve Sidwell scoop another bouncing ball over with the goal gaping.

In contrast, the Baggies were struggling with their final pass when they attacked and their only chance of the first half saw Thievy Bifouma drill his low shot straight at Stekelenburg after escaping on the break.

West Brom's lack of invention meant Fulham always looked the most likely side to break the deadlock and it was Dejagah who deservedly did just that after 28 minutes.

Holtby made a rare error, taking an air-shot at Kieran Richardson's cross, but the ball ran into the path of the Iranian, who took a touch and coolly steered home a low shot from the right-hand side of the area.

It took a fine save from Ben Foster to stop Hugo Rodallega from making it 2-0 before half-time and the home side were booed off at the break.

There was no way the Baggies fans could fault their side's efforts after half-time, however, and in truth it appeared only a matter of time before an equaliser arrived.

The introduction of Zoltan Gera and, in particular, Victor Anichebe brought them to life and they pressed hard for a leveller.

Brunt saw a fierce strike tipped to safety by Stekelenburg and Anichebe had a goalbound effort blocked. Somehow, the Fulham goal survived.

"One point is one point but I think we were too open in the first half and the second half was good. We needed two points more.

"I believe in the next match against Manchester United we can win. There is a nervousness in the changing room.

"It is February and we have got three months ahead of us to work. We need to work on the pitch for 90 minutes. I don't know how many wins we will need to stay up but of course we need to win a game to keep the players smiling and for the fans too."

"We were so near to a victory, we are disappointed but in the whole game, 1-1 was correct. It was a fair result.

"We have had only a few days together. You cannot change many things.

"I crossed the fingers but that is not enough. We have to play 90 minutes and try to make no faults. We made too many faults in the second half.

"We were away and I think it was not very good but a point is good."