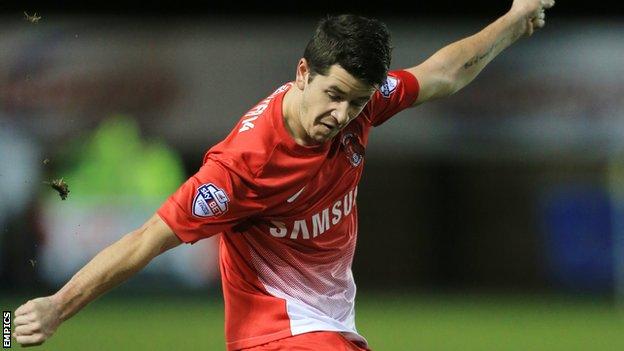 Leyton Orient beat Swindon and went top of League One thanks to two Lloyd James penalties.

Chris Dagnall struck a post and Moses Odubajo blazed well wide as the home side looked the most likely to take an early lead.

James then put the hosts ahead from the spot after Jamie Reckord brought down Odubajo in the area.

And he doubled the lead after the break when David Mooney was brought down by Troy Archibald-Henville.

Orient are top of the table by virtue of goals scored after Wolves beat Brentford 3-0.

"The important thing was to get the win and it was about getting the performance and wanting it more than the opposition.

"I thought we were well worth the three points. We were creating chances all afternoon and without the ball I felt we were excellent today.

"We have showed great character with two back-to-back wins after some iffy results recently. What we have to concentrate on is each and every performance.

"Before today there were 42 points to play for and now there are 39. We have to fight for every one if we want to get to where we want to be."

"I didn't think there was too much danger in the first half and a ridiculous tackle gives them a penalty just before half-time.

"Second-half, first 20 minutes we were not very good and then when it's 2-0 and the game is over, we start to play a little bit.

"We didn't threaten their goal enough but we have a way that we want to play.

"You can't make two challenges like we did in the penalty area and give two penalties away and expect to win games of football."