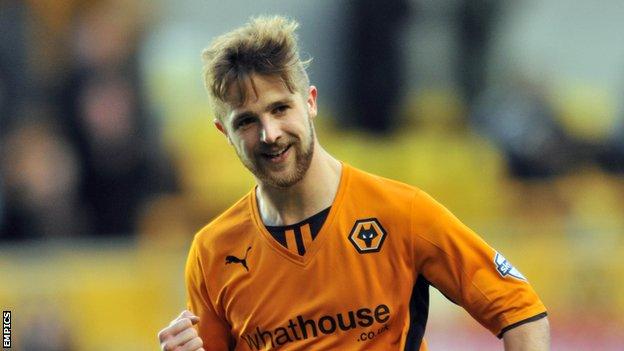 Wolves ended Brentford's 19-game unbeaten run in League One to leapfrog them and go second in the table.

The first half lacked clear-cut chances, but Wolves had the lead just before the break when James Henry curled home Kevin McDonald's cut-back.

Adam Forshaw and Alan Judge both went close to bringing the Bees level with long-range efforts that went just wide.

But Michael Jacobs finished off a terrific Wolves counter-attack before striking the third into the top corner.

Brentford manager Mark Warburton tasted defeat for the first time since he took charge, as the morning leaders dropped from top spot to third, their loss compounded by Leyton Orient's victory over Swindon Town.

Brentford had edged the opening stages of the game at Griffin Park, but it was Wolves who had the first real opening of the match as Nouha Dicko fired straight at Brentford keeper David Button when through on goal.

After Carl Ikeme did well to stop a fine effort by Judge, Henry gave Wolves the initiative going into the break from McDonald's ball from the byline.

After half-time, Brentford piled pressure on the visitors, with Forshaw's strike deflecting just wide off Jack Price, before Judge was narrowly off target from 25 yards out.

However, Jacobs slid the ball underneath an oncoming Button against the run of play before striking from the edge of the area to seal his side's sixth successive win and hand Brentford their first loss in the league since 12 October.

"I think we lacked a bit of belief in the first half, we didn't play at our tempo and both teams gave each other too much respect initially.

"Despite going a goal down at half-time, we were confident.

"For the first half an hour of the second half we were good but not very good. We lacked a bit of quality in the final third and we didn't take care of the ball

"I don't think it should have been 3-0 but we have to learn from this.

"The message to the players was remember that horrible feeling right now, we don't want it again and learn what we can do better as a team."