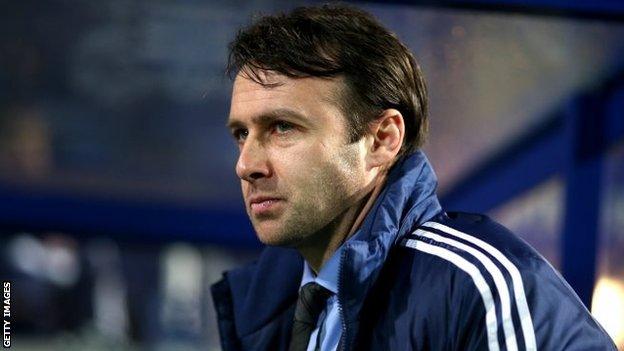 Dougie Freedman's side had not won a Championship game since Boxing Day but went ahead when Jutkiewicz tapped home following a Jay Spearing free-kick.

Mason had missed three chances to score before he did double the lead after Neil Danns's flick-on.

Only Birmingham (two) have won fewer home games in the Championship than Bolton (three).

It was only a third home win all season in the Championship for Freedman, who said last week he did not fear for his job at the Reebok Stadium.

His side had managed just 18 league goals in front of their own fans all season before this game, but loanees Jutkiewicz and Mason proved a dangerous partnership against the Hornets.

Mason, who rejoined the club from Cardiff on Thursday, saw an early shot saved by Manuel Almunia's feet before Deeney's header was well saved by Adam Bogdan at the other end.

Mason was again denied by Almunia before Jutkiewicz opened the scoring at the far post from Spearing's curling set-piece.

Bolton doubled the lead before the break when Danns won a header to send Mason clear again, and this time he beat Almunia convincingly.

Sean Murray hit a half-volley straight at Bogdan after the break but Watford were unconvincing.

"I thought we played very well and entertained the crowd and I felt the margin of the victory was the least we deserved.

"I was very satisfied. We worked very hard as a team to keep that clean sheet. I felt that was the difference.

"When Watford asked us a few questions we dealt with that well.

"That's very pleasing as a coach and that's what you work for throughout the week."

"What I want to do now is to say sorry to all the people from Watford who travelled here to watch the game.

"I know that it is not possible but if I could, I would replay the game now.