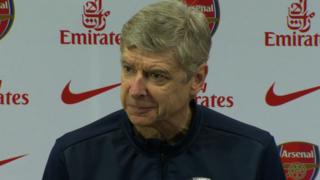 Title is Chelsea's to lose - Wenger

Arsenal manager Arsene Wenger says the Premier League title is now Chelsea's to lose, but that it will remain "tight until the end".

The Gunners boss goes on to say that other managers are denying their credentials in the title race because of a "fear to fail".

Arsenal face Liverpool on Sunday in the FA Cup, just over a week after losing 5-1 in the corresponding league fixture at Anfield.

I don't have mind-game skills - Klopp