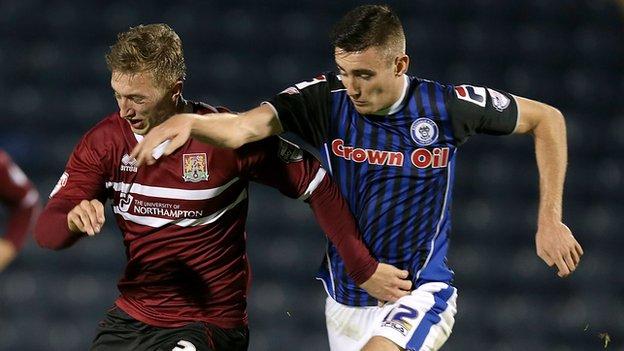 Rochdale went top of League Two after they cruised to victory at Northampton, despite playing with 10 men for much of the second half.

Matt Lund then doubled Dale's lead on 54 minutes, but was shown a second yellow card for his goal celebration.

The hosts could not find a response, going three down when Joe Bunney met Henderson's pass to fire home.

Northampton remain 23rd, but are now three points adrift of safety, while Rochdale take over on top by a point from Chesterfield.

"We're big enough to stand up and say it wasn't good enough.

"Thankfully it's only three points lost, although, obviously, our goal difference has taken a battering.

"The players know that the managerial staff aren't happy and they shouldn't be happy on a personal level - both individually and collectively.

"People thought I was crazy coming here but I said we'd stay up when I arrived and I still believe that."

"We were ruthless. We could have scored more because we had other opportunities.

"I'm pleased with where we are and what we're doing - it's been a very good season so far and we've got nine games left.

"The league table doesn't lie but it's not really a concern.

"If we're in the same position with three games to go, we can start dreaming."