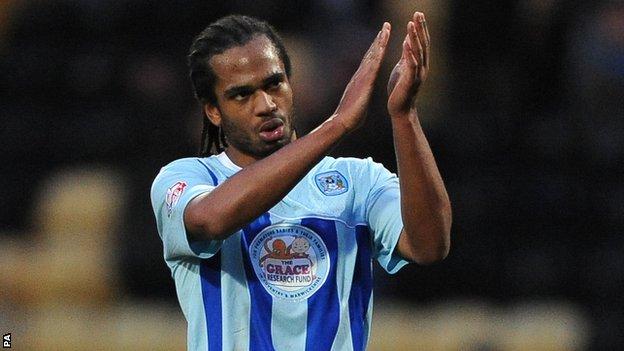 Coventry City loan striker Nathan Delfouneso came off the bench to hit his first goal for the club as they beat Walsall for their first win at Sixfields since Boxing Day.

Walsall levelled after the break through full-back Mal Benning's first goal for the club.

But Delfouneso found the top corner from close-range six minutes from time.

It then took a superb double save from home keeper Joe Murphy to earn Coventry only their second win in 10 games.

Aston Villa loan man Nathan Delfouneso's last goal came in February 2013, when he was on loan at Blackpool. He scored in injury time to earn the Tangerines a 2-1 home win over Millwall.

On only his second game back after two months out following surgery on a dislocated shoulder Callum Wilson's 16th goal of the season was his first since Boxing Day.

15 of those goals have come in League One, putting him level with the now departed Leon Clarke as Wolves' leading league marksman.

Walsall made one change from the side beaten 2-1 at Preston on Saturday, bringing in Romaine Sawyers in place of the suspended Sam Mantom, who had failed earlier in the day to have Saturday's red card at Deepdale overturned.

The Sky Blues were also forced into making a change in midfield, Mark Marshall coming in for the injured Franck Moussa.

Coventry had to survive a scare, Murphy making a brilliant instinctive one-handed save to parry Craig Westcarr's point-blank deflection, before taking the lead. Wilson burst through the middle from Arsenal loan striker Chuba Akpom's flick-on on 22 minutes.

It would have been 2-0 on the stroke of half-time, but for Walsall keeper Richard O'Donnell. He matched Murphy's save with one of his own to prevent Andy Butler putting the ball in his own net from QPR loan man Michael Petrasso's cross.

Instead, Benning levelled when, having had his initial shot saved by Murphy, the Coventry keeper parried Febian Brandy's low shot - and Benning ran in the rebound.

But Aston Villa loan man Delfouneso struck on 84 minutes to leave Walsall with just one point to show from their last five games.

"I'm really pleased for the players. They deserve this. We look like a team that can get results again.

"The players have had to deal with a lot this season. The truth of the matter is that, with the points we've accumulated, but for our 10-point penalty, we'd now be one point off the play-offs.

"But instead of sitting just below the top six and hunting down the teams above us, we have to deal with the pressure of relegation.

"Walsall are a good side with a good manager and they pinned us back for a period but what pleased me most was the positive reaction after losing the goal."

"We didn't do a lot wrong first half and found ourselves a goal down but, in the second half, we were excellent. We were camped in their half for long periods.

"But, on the run that we are on, things are not going our way and key decisions went against us once more, particularly in the build-up to their opening goal when there was a foul on Febian Brandy. That's three 2-1 defeats in a row and unfortunately mistakes from officials have cost us in each one. They're human. They make mistakes. We can't control that.

"We deserved something from the game and it was criminal that we came away with nothing. They've spent a lot of money getting Delfouneso in and he ends up getting the winner.

"But it was nice to see Mal Benning get his first senior goal for the club for us. It was a good strike. He was in the right place."

Shots on Target
Home8
Away9