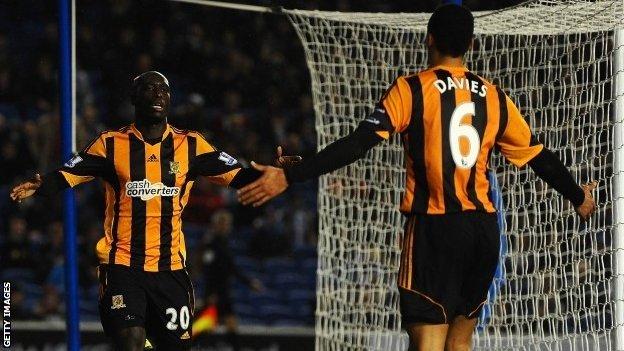 A late strike from Yannick Sagbo averted an upset as Premier League Hull snatched a draw and a replay away to Brighton in the FA Cup fifth round.

Sagbo had hit the bar for the visitors before Brighton took the lead, Leonardo Ulloa galloping clear to stroke home.

Hull rallied as Curtis Davies went close, but were spared when Ulloa wasted a fine chance on half-time.

It looked like the Argentine's goal would be decisive, but Sagbo fired in to cap a spell of late Hull pressure.

For much of the second half it seemed that Brighton were destined for a reunion with former manager Gus Poyet, whose Sunderland side await the tie's winners in the last eight.

Oscar Garcia, Poyet's replacement at the Amex Stadium, has guided the Seagulls to the fringes of the play-offs in the Championship and, after he appeared to prioritise promotion with seven changes to his starting line-up, his team turned in a performance of quality and tenacity to take Hull to the brink.

Hull have not won away to Brighton since 1965 - a run that now stretches to 21 games.

However the Tigers, who badly missed cup-tied strikers Nikica Jelavic and Shane Long, found their attacking edge just in time as Sagbo reacted well to convert Sone Aluko's cross and could have won it when Robert Koren and David Meyler went close late on.

That frantic finale was in contrast to a disjointed first 20 minutes in which only Jake Forster-Caskey's hooked volley over the bar and a wayward Will Buckley effort stirred the home crowd into life.

But Sagbo's improvised volley against the bar was the signal for the match to step up a gear.

Brighton responded with a slick counter-attack as Ulloa flicked the ball into the path of Buckley before accelerating past Tom Huddlestone, controlling the return and deftly scooping the ball over the advancing Allan McGregor.

There will be a manager up against their old club in the next round whoever comes through to face Sunderland in the last eight.

Hull boss Steve Bruce spent a little over two years in charge of Sunderland before he was dismissed in November 2011. Gus Poyet, now in charge of the Black Cats, was sacked by Brighton in July.

The hosts' lead was almost wiped out two minutes later as Curtis Davies's header rattled the frame of the goal and Peter Brezovan reacted sharply to prevent the rebound looping into the net.

But Hull, whose high defensive line looked vulnerable throughout the first half, headed into the interval relieved as Ulloa planted a standing header wide when unchallenged at the far post in injury-time.

Brighton's industrious and inventive Buckley, returning from a hamstring injury, was withdrawn at the break, but the expected Hull siege took time to materialise.

With neither side apparently eager to add a replay to their fixture list, there were chances at both ends in the final minutes.

But Meyler saw a header cleared off the line after Matthew Upson failed to make a telling connection from a Brighton corner and they will face each other again at the KC Stadium next Monday.

Hull manager Steve Bruce: "We didn't play well at all in large patches of the game but we stuck at it and the substitutions we made freshened us up a bit. In the end we could have nicked it.

"It's difficult now with replays and all the rest of it, but we're still there and we've got a good chance.

"If we win the replay we've got a quarter-final at home in the FA Cup.

"We've got to go and give it our best shot. We might never ever get this far again."

Brighton boss Oscar Garcia: "In the first half we were the better side, but in the second half the game was close.

"We had the chances to win, but the game could have gone either way. If we scored the second it would be different, but they took their chance late on.

"But I'm pleased with the performance of my players. It's not easy to play against Premier League opposition but we have shown that we can compete with them.

"When you concede a late goal, you can be a little bit disappointed but my feelings are really good and I'm happy all my players showed to everybody that they can play."