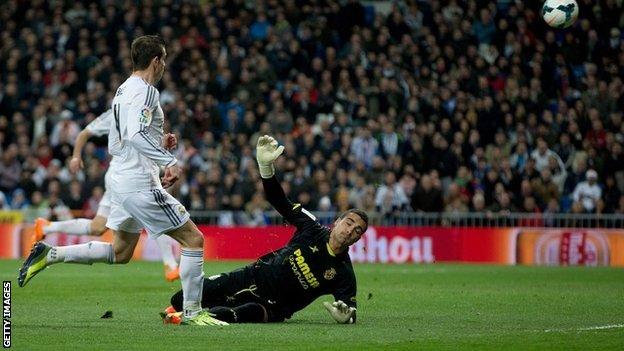 Mario Gaspar pulled one back with a fierce first-time drive but Jese put Real Madrid in control with a delicate finish.

Giovani Dos Santos scored a brilliant free-kick for the visitors but Benzema sealed it from 18 yards.

Real Madrid, who were without the suspended Cristiano Ronaldo, are now unbeaten in 23 games in all competitions.

Ronaldo's replacement in the team, Bale, took only seven minutes to make his mark when he took the ball off dawdling defender Jose Antonio Dorado to charge into the box and lift the ball over keeper Sergio Asenjo.

He then put in a cross for Benzema, which the France international tucked home at the near post.

Right-back Mario fired past Diego Lopez late in the first half to give the Yellow Submarine hope.

Real re-established their two-goal lead when Angel Di Maria played in 20-year-old Jese, who touched the ball past Asenjo to score for the fourth game in a row.

Giovani curled home a fantastic free-kick from 25 yards out but Benzema clinched the victory from the edge of the box after Jese had laid the ball off to him.