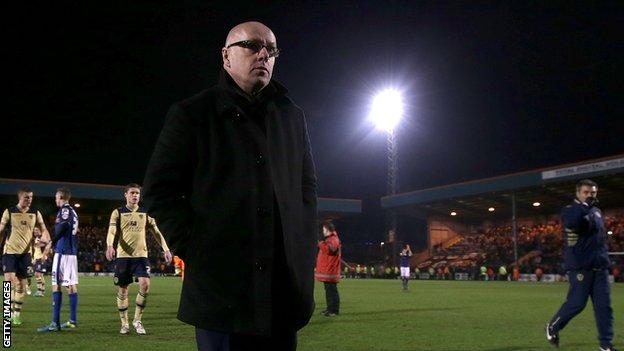 The 52-year-old's departure comes with Massimo Cellino, the owner of Italian club Cagliari, close to an agreement to take over the Championship club.

McDermott was appointed as Neil Warnock's successor in April 2013.

"From the bottom of my heart, thanks to each and every Leeds United fan for your support," McDermott told BBC Radio Leeds.

Leeds won 15 of their 36 matches under McDermott but are winless in eight games and lie 12th in the table, eight points from a play-off spot.

Included in that recent slump was a 6-0 league defeat at Yorkshire rivals Sheffield Wednesday and an FA Cup exit at the hands of League Two Rochdale.

But, while the form had been poor, the timing came as a surprise to many. Deadline day represented Leeds' last chance to make permanent signings for the season, although the loan window for Football League clubs re-opens next week.

Former England captain Gary Lineker said: "What an extraordinary time to sack a manager. Leeds throw Brian McDermott out of the window."

It has been reported that Cellino is keen to install former Middlesbrough defender Gianluca Festa as Leeds boss, if he can complete a deal to take control of the club from its current owners - the Dubai-based investment group GFH Capital.

And police were called to Elland Road on Friday night after fans turned up to protest. News of Cellino's presence at the ground spread on social media and fans attempted to block exits to prevent him leaving.

Everybody knows Brian McDermott's qualities. He's a fantastic manager and a friend of mine, a great man. It's sad that Leeds United conduct their business like that.

Striker Ross McCormack, who was the subject of a failed bid by West Ham earlier this month, told Sky Sports News he was "absolutely gutted" at McDermott's sacking.

"I was looking forward to helping the club move forward under Brian McDermott and he made me captain," he said. "I'm very happy and content at the club but a big part of that was Brian McDermott.

"If I'd known that this was going to happen, I'd have had a right decision to make. I think he was a bit surprised in terms of how quick it happened, I think he always had an inkling.

"Me, speaking on behalf of all the players, would like to thank the gaffer for all his efforts and wish him well for the future."

Speaking to BBC Radio Leeds earlier on Friday, McDermott admitted he was not sure if he would be in charge of the club beyond their Championship derby against Huddersfield Town.

"I've got no idea if I'll be here after Saturday's match," said the former Reading manager, who led the Royals to the Championship title in 2011-2012.

"In football any game could be your last match so you have to make the most of it, especially at a club like Leeds United."