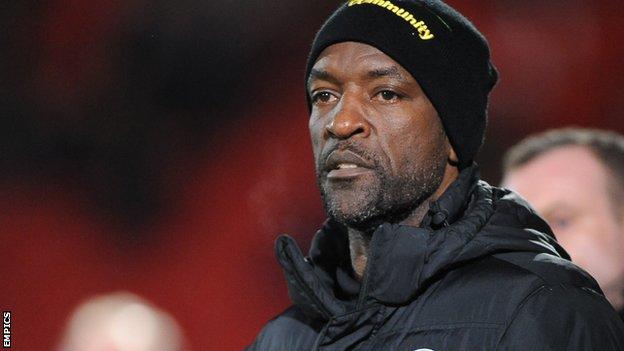 Charlton manager Chris Powell insisted they have time to turn their season around after defeat at Doncaster kept them in the relegation zone.

The Addicks had Lawrie Wilson sent off as they lost 3-0 at Keepmoat Stadium.

"It was the worst performance of the season so far in a real vital game," Powell told BBC London 94.9.

"I have said to the players there are 20 games to go. That is virtually half the season, just under. Sometimes you have got to take stock."

Charlton have not won in the Championship since their 3-2 victory over Brighton on Boxing Day, a run of four matches.

They have progressed to the fifth round of the FA Cup after overcoming Oxford and Huddersfield, but Powell is concerned by their league form, which has seen them slip to 22nd in the table.

We have got all this speculation and the transfer window to deal with. We are vulnerable to it and always have been. People will always look at the quality players I have here

"In one of the biggest games so far this season it just looked like a game too far for us," the 44-year-old said.

"We do need to lift ourselves and quick. No doubt we can move on from it. We've done it before. We've got to dust ourselves down and look at it in a real positive way."

Powell is hoping he is able to keep his squad intact, with the January transfer window set to close on Friday night.

"We have got all this speculation and the transfer window to deal with," he said.

"Like most managers I will be happy come midnight on Friday.

"We are vulnerable to it and always have been. People will always look at the quality players I have here. They may be looking at the situation we are going through as a club and feel it is the right time for them to bid.

"I can't stop that. I wish I could. It is not great for us in that respect, but we have to get on with it.

"We've got a job to do to get our club away from the position we are in right now."