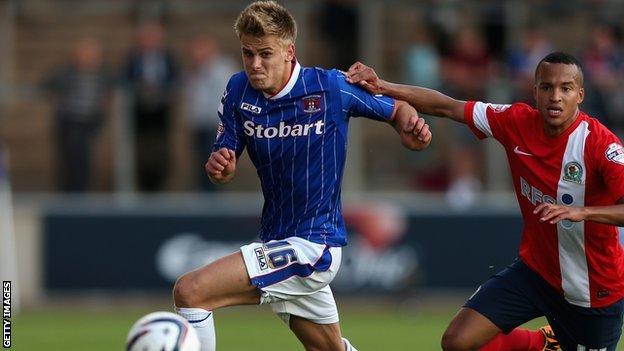 Carlisle United's Brad Potts said his first senior goal had been "a long time coming" after scoring in their his 56th game for the club.

The 19-year-old was used at right-back in most of those matches, but since Graham Kavanagh became Carlisle boss he has often played in central midfield.

"I don't mind playing at full-back, but I do prefer having the chance to break forward," Potts told BBC Radio Cumbria.

Carlisle boss Graham Kavanagh was a goal-scoring central midfielder. His most prolific season came in 2001-2 when he scored 15 goals for Cardiff City in English football's third tier.

"I was over the moon to score. I nearly dived past the ball but just got it."

Kavanagh has been in charge at Brunton Park since mid-September, and only named Potts in the starting line-up twice in his first 15 League One games at the helm, but the teenager has been in the side for six of the last seven games.

The 3-0 victory over Milton Keynes ended Carlisle's four-game losing sequence and pulled them four points clear of the relegation zone.

"Kav speaks to younger players all the time so we know we might not playing every single game as it's hard to be consistent," Potts explained.

"It's my job to make it hard for him not to play me by getting on the ball as much as possible. With him having been a central midfielder, I know I can learn a lot from him every day."

Meanwhile, Kavanagh confirmed to BBC Radio Cumbria that ex-Celtic and Hibernian striker Derek Riordan is training with the club.

The 30-year-old former Scotland international has been a free agent since in December 2012.