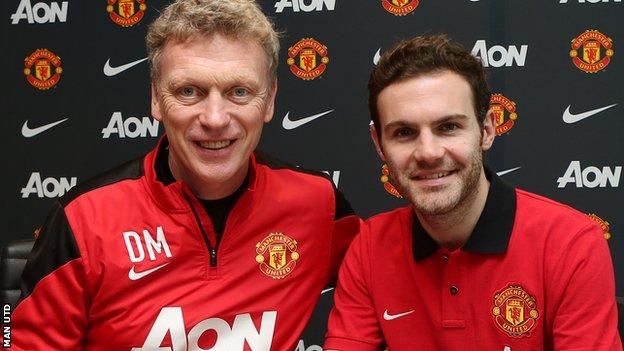 Juan Mata has completed his £37.1m move from Chelsea to Manchester United in a record transfer deal for the reigning Premier League champions.

The Spain midfielder had a medical on Saturday and has signed a contract, understood to run until summer 2018.

Mata, 25, is likely to make his debut at home against Cardiff on Tuesday.

(Stats are for all competitions)

"The time has come for a new challenge," he said. "I am excited at the chance I have to be part of the next phase in the club's history."

He added: "Chelsea is a top club and I have many friends there but you cannot turn down the chance to join Manchester United. I look forward to helping the manager and the team be successful in the coming years."

Mata, capped 32 times by Spain, will be unveiled at a news conference on Monday at 13:30 GMT.

Mata, who joined Chelsea from Valencia for £23.5m in August 2011, has been Chelsea's player of the year in both full seasons he was at Stamford Bridge.

He scored 32 goals for the Blues and made more than 130 appearances but has failed to command a regular starting place under Jose Mourinho, who returned to Chelsea last summer for a second spell as manager.

"Juan is one of the finest playmakers in the game today and it's a real pleasure to have secured his signature," said Moyes.

"He's been instrumental in Chelsea's recent success, with a notable 28 assists and 32 goals in his last two Premier League seasons.

"I have been impressed with the excitement he has shown to be part of the new Manchester United.

"I know our fans have admired Juan for some time now - he has always played well against us - and I know they will be delighted to see him in the red of United, starting on Tuesday."

Mata posted a letter on his official website thanking Chelsea fans for their support since moving to Stamford Bridge two years and five months ago.

He said there had been many highlights, including winning the Champions League in May 2012, but added: "On the other hand, I have experienced some complicated situations from a personal point of view, mainly during the last six months.

"Before last summer, my intention was to stay here for a long time; as long as the club wanted me to, and to keep winning trophies for Chelsea.

"However, as you all know, things changed after the pre-season.

"From feeling like an important player, I started to experience some difficult situations and I felt unable to help the team to the extent that I wanted and was used to.

"Obviously, I fully respect the circumstances."

Mata goes on to praise all the managers he served under at the club - Andre Villas-Boas, Roberto Di Matteo, Rafael Benitez and Mourinho.

"Lastly, I want to thank the club, and in particular its owner, Roman Abramovich, for trusting me and making an important investment when signing me," he adds.

"Also for their understanding regarding my situation over the last months.

"I'm very glad to have been part of the squad that made his and our dream come true: winning the Champions League on that unforgettable night in Munich.

"Although many of you, like myself, never thought this moment would come, this is football and a new chapter is about to begin.

"I will never forget my time in Chelsea and the affection I take with me, I will keep forever."